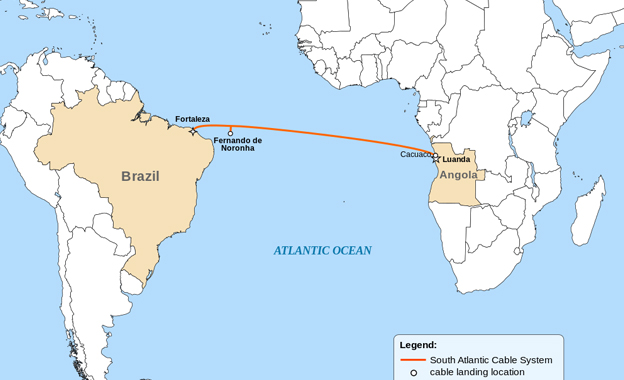 Africa is benefiting from a new digital information highway, as the South Atlantic Cable System (SACS) is now officially on-stream and open for commercial traffic. The new cable offers faster connectivity between America and Africa.

The advantages of the new connection: low latency (less delay before a transfer of data begins following an instruction for its transfer) and resilient connections. Also, the cable will also contribute to reductions in data traffic costs between South America and Africa.

The newly constructed cable on the sea-bed offers the first and fastest link between Africa and the Americas, with the ‘lowest latency’. By starting operations with the cable, users in Africa will benefit from a more direct routing for internet traffic.

The new cable will see data transfer speeds improve five folds more compared to existing cable routings. Technically speaking: the cable reduces latency from Fortaleza (Brazil) to Luanda from 350ms to 63ms. According to a report by BizTechAfrica, the capital of Angola will connect to London and Miami with approximately 128 milliseconds latency.

In Kenya, a series of Alphabet Inc’s Loon balloons will be launched to beam high-speed Internet access to cover rural and suburban populations.