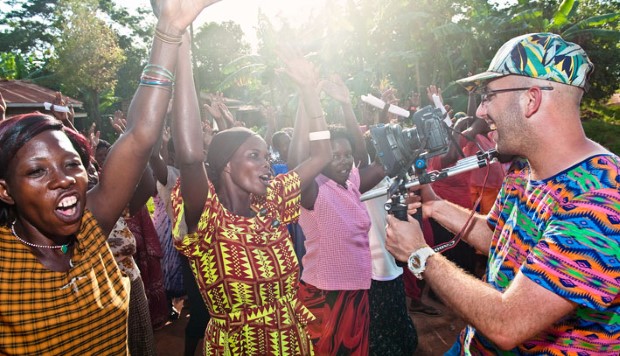 ‘It’s not about the money, money, money. We don't need your money, money, money…’ In a remote village two hours driving from the Ugandan capital Kampala, five hundred rural women loudly sing British singer Jessie J’s hit ‘Price Tag’, popular in the West, but totally unknown in Africa. The ladies in colourful dresses continuously smile into the camera while the filmmaker runs around them capturing their dancing bodies on film.

Big task to learn the lyrics by heart

‘We are filming a lipdub’, Ivan Mikulić explains. Though I never heard of it, these one shot filmed video clips in which ordinary people mime a famous song, appear to be a big hit on the internet. Filming a lipdub in Africa appears to be quite challenging, the 32-year-old Dutch-Bosnian filmmaker, who did many lipdubs in the Netherlands, tells me. ‘Because most of these women don’t speak English and are often even illiterate, to learn the lyrics by heart is already quite a challenge.’

According to the director ordinary Westerners are also more accustomed to act in front of a camera. When Mikulić tries to teach the women how to follow the camera with their eyes and flirt with it, the Ugandan ladies roar with laughter. Finding beautiful locations, on the other hand, appears to be very easy. The lipdub has been filmed in some of the colourful villages and at the local fish market.

The Dutch social company Sypo uses this lipdub to promote their recently launched website www.microbanker.com. Via this website people can make small loans to rural Ugandan women who can then start their own small business. Agnes Ndagire, for example, started a mushroom farm with a loan of 600.000 Ugandan shilling (232 dollar) and her successful business now has a tremendous effect on her living conditions and that of her four children. ‘Before, I didn’t have enough money for food and school fees. Nowadays I send my children to an expensive private school where they receive high quality education.’

But why make a lipdub to promote such a website? ‘Our generation is tired of all those commercials with sad looking children and a voiceover explaining you how to help them’, Mikulić believes. ‘Today you need to surprise people, bring a smile on their face and make them curious enough to click through to your website.’ And a lipdub in Africa is something new. According to the filmmaker it hasn’t been done before.

Also Duko Hopman, director of Sypo, sees the lipdub as a perfect way to draw attention to the new website. ‘ In short timeframe and in a nice, entertaining way the video shows people the diversity and volume of businesses started with loans, such as a hairdresser, a phone charge kiosk, a fish shop and a pig farm. These days companies in The West tend to use lipdubs to promote their products, but swinging Africa lends itself so much better for this.’

Why I should have registered long time ago

Now that Paul the Octopus has died, and South Africa’s World Cup stadiums have by and large been turned into white elephants, it’s time...