When Jurie Willemse founded GroFin in 2004 to fund unserved and underserved entrepreneurs in Africa, there were many sceptics of his unique financing model. But, with a quarter century of entrepreneurship experience behind him, Jurie knew first-hand what an entrepreneur needs most: a unique combination of finance and business support, not just finance alone.

Unlike traditional financiers whose interaction is limited to application assessment, loan disbursal and repayment milestones, GroFin provides its entrepreneurs with end-to-end business support. This entails business planning, financial monitoring, marketing expertise, operations support and market linkages. Jurie Willemse is an experienced entrepreneur himself whose passion for entrepreneurship took seed in the idea of funding and supporting small businesses through a unique financing model. Founded in South Africa in 2004 and currently headquartered in Mauritius, GroFin is presently operating in twelve countries across Africa and the Middle East.

With over a decade of experience and more than 8,000 entrepreneurs supported across Africa and the Middle East, Jurie proved his sceptics wrong. “Developing a successful pioneering model to serve the needs of entrepreneurs is a process, a process where you build on the successes and learn from the failures”, says Jurie. What remains unspoken is his capacity to see what others miss, a talent that has seen GroFin garner €450 million in funding commitments from its investor partners.

The intention of a GroFin investment is to create impact in communities by supporting businesses that create jobs, such as manufacturing, supply chain, wholesale and retail firms. In addition, GroFin’s aim is to create tangible socio-development benefits: schools, hospitals and agro-processing firms. GroFin loan packages range in value from €90,000 to €1.4 million over a period of two to eight years. Collectively, GroFin loans support 62,450 jobs – including 21,350 jobs for women – contributing more than €500 million each year in value added to local economies, and positively impacting more than 300,000 lives. 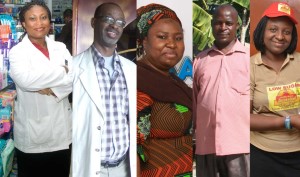 GroFin prides itself on funding start-ups, which constitute as much as 25 per cent of its portfolio. To put matters in perspective: a GroFin entrepreneur stands an 85 per cent chance of success, compared to an average entrepreneur who faces an 80 per cent risk of failure. So, how does GroFin do it? The answer lies in the GroFin formula: Finance + Expertise = Success.

Take the case of Francine from M.Line Petrol in Rwanda, who needs expert help as she powers on with her dream of setting up petrol stations across the country. GroFin has not only invested in excess of €1 million in the form of a term loan over five years, but has also gone the extra mile by reviewing her business model and identifying additional revenue streams for her growing business.

“I expect to double my market share within just a year of GroFin support. GroFin not only provided me finance but also reviewed my business model and provided me with innovative revenue diversification strategies such as convenience stores for my petrol service stations”, says Francine.

Be it a school like Daystar in Tanzania, a hospital like Ubuzima in Rwanda, a publisher like Mukono in Uganda, a fleet management company like Tracetec in South Africa, an OMC like Universal Oil Marketing in Zambia, a retail petrol chain like Linklaters in Ghana, or an alternative energy company like Total Support in Nigeria – GroFin entrepreneurs come from all walks of life.

E4Impact- How to build African ideas into enterprises

Venture capitalist Nest from Hong Kong wants to be the investor of choice for start-ups with brilliant and scalable ideas, now in Nairobi, Kenya, too.