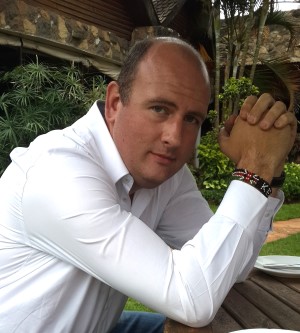 After an adoption that required Sjoerd Kuperus and his family to stay in Kenya for 9 months, in 2012 they decided to stay for a prolonged period. Today, Sjoerd is Managing Director of the Netherlands Business Hub in Nairobi: a private sector initiative that supports Dutch companies and entrepreneurs with an interest in doing business in East Africa. “In Europe, the margin for innovation is wearing out. In Africa, underexplored entrepreneurial grounds abound.”

For Dutch entrepreneurs, East Africa is about 8,000 km away from home. With the local presence and network of the Netherlands Business Hub, companies feel comfortable to discuss investment opportunities and make use of the Hub’s network to establish their own companies overseas. “Newcomers often enter the unknown”, says Sjoerd. “To be able to rely on an established network, is valuable.” The Hub is an initiative of the Netherlands-African Business Council and the Netherlands Water Partnership, and is supported by the Dutch Embassy in Nairobi and the Netherlands Enterprise Agency (RVO).

To create a sense of ‘hub’, the ‘Hub’ rents out office spaces from its own premises. For which, according to Sjoerd, there is a waiting list. “A space that helps entrepreneurs connect is in high demand. In fact, I think the creation of a hub like this is a few years overdue.” While Sjoerd is charged with the management of the initiative and the acquisition of new clients, the hub houses specialists in various sectors. Depending on traction in a sector, a new specialist will be attracted for that discipline. The hub furthermore assists companies in business-related issues like taxes and investment decisions.

“Kenya and East Africa are experiencing impressive GDP growth rates of up to an annual 5 per cent on average”, says Sjoerd. “Which is incredible, but does not come without its own problems. East African growth is restrained by government spending. Due to limited cash flow, governments may be forced to take shortcuts instead of considering an investment’s long-term impact. An example is the construction of a motorway without drains. Which cuts travel times between one city and another by a factor of three, but creates a flood issue for the villages bordering that motorway.”

“In this example, The Netherlands Business Hub can add value because the Dutch are experts when it comes to water. If one company manufactures water pumps, another tubes, and yet another drainage systems, they will each focus on their own field of expertise. Coming into the region, they might not even be aware of each other’s presence. The Hub can increase mutual strength by facilitating cooperation, for example by creating a consortium.”

Sum of the parts

To date, the Hub has supported a company move from Tanzania to Kenya and find the right Kenyan partners, advised another company how to save €8000 on work permits by introducing a freelancer from its network, and is currently helping incoming companies identify opportunities that suit them. And this is just the start.

“One of our roles is to match companies with opportunities fit for them”, concludes Sjoerd. “In the context of the Netherlands-African Business Council’s African corridors programme, there is a lot of corporate interest, each company bringing its own expertise to the table. Our locally rooted knowledge helps identify opportunities across the East African business landscape and create matches between opportunities on the one hand, and companies on the other. This way, we exploit each other’s strength. As a result, the sum of the parts adds more value than a single company could have accomplished.”

BiD Network is organizing an impact investment trip to Rwanda from 8-13 November 2015, to close the geographic gap between entrepreneurs & angel investors.

Light for business and football