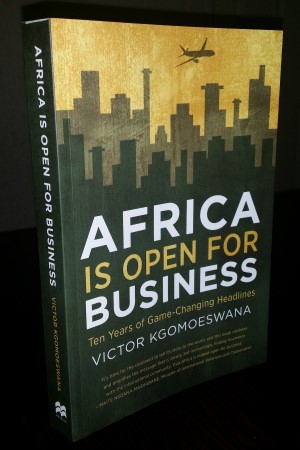 “As high-level business consultant at EY’s ‘Africa business centre’, business news commentator for South Africa’s Radio 702, and business editor at SAfm, I spent the past decade informing an audience of Africa’s business headlines and guiding multinationals around the continent. During a decade of unrivalled progress I gained an extraordinary helicopter view that I believe everybody deserves to know about!”

Victor Kgomoeswana authored ‘Africa is open for business – Ten years of game-changing headlines’, which was released on the 22th of May 2014. In 50 compact chapters of each between six and eight pages, Victor describes how trends, organisations, personalities and countries have changed the face of the African continent for good. “I wanted it to be a fresh, easy read”, Victor says. The book was published by South African Pan MacMillan. Non-South African readers can purchase the e-book on Amazon.com.

“On my EY travels to non-African places”, Victor, who is zealous about Africa, explains, “I met countless investors interested in Africa. Yet I found they are often poorly connected, and unaware of what the continent has to offer. My message contained in a book allows me to reach a wider audience, and build relationships with those who would otherwise have missed out on Africa’s riches.” Using business headlines as a point of departure, Victor found himself forced to stop and reflect. Victor: “It is easy to obsess over events and make every incident seem a trend. But when a country consistently makes headlines for years and years in a row, you know that it counts. Careful not to obsess over occurrences, I gathered ample evidence for each trend that I describe in my book.”

An exemplary case that Victor refers to, is the celebrated collaboration between AIR FRANCE KLM and Kenya Airways. Victor: “Rather than purchasing 200,000 aircrafts, Kenya Airways built an alliance with AIR FRANCE KLM. It is an approach to cooperation that I think holds the future for corporate Africa. AIR FRANCE KLM gained access to previously unexplored markets while on its part, Kenya Airways opened up a plethora of European destinations for African travellers. Without collaboration, AIR FRANCE KLM may have found itself restricted to Francophone Africa. And as advanced as it is, Kenya Airways is now forced to meet the standards of a first-world airline. I am tired of hearing about Europe as former colonial ruler – the above is simply a heart-warming story, which underscores room for collaboration to benefits both parties.” 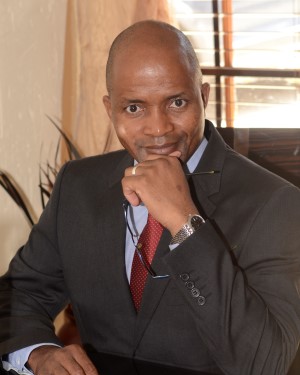 Africa’s business headlines of the past ten years led Victor to write about countries, also. “Rwanda is our number one”, Victor boldly declares. “It is the leading mainland-African economy. Rwanda ranked 168th on the World Bank index for ease of doing business only ten years ago. Today it proudly occupies the 32nd position. Rwanda is a prime example of an economy that moved from a disaster to a role model.”

“What is your expectation of the decade to come?”, we ask Victor. “I believe the African continent will consolidate the changes that occurred during the past decade. Whether through cell phones or fibre-optic cables, Africa’s coming online coincided with a global desire to connect. I foresee that retailers and financial service providers will use this ever-expanding connectedness to reach more Africans.”

A conversation about entrepreneurship in South Africa