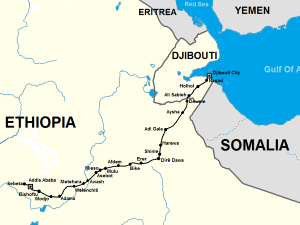 The brand new railway system between Addis Ababa (Ethiopia) and Djibouti has been officially opened. The first fully electrified cross-border railway line in Africa covers a stretch of over 750 kilometres.

The new service – with trains that can travel at a speed of 120 km/h – cuts the travel time from three days by road to approximately 12 hours. The electric railway (cost: €3 billion) was funded by a Chinese bank; it will be run and maintained by Chinese staff.

The opening of the new railway route from the Ethiopia capital to the harbour city of Djibouti is expected to boost both economies. Initially, the train will solely be used for freight transport.

According to a report by the Railway Gazette, it will be much cheaper and more reliable than travelling to Djibouti by road. A container from Hong Kong to Djibouti will take between two to three weeks. Before the railway connection was opened, it took more than that to take it from Djibouti to Addis Ababa.

Image by Skilla1st, via Wikimedia Commons

Kia Motors touches down in Ethiopia - and possibly in Algeria

Kia Motors has closed a deal with a business partner in Ethiopia for the assembling of its cars. Algeria might be the next.