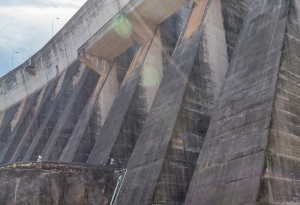 Ethiopia has opened Africa’s tallest dam – the Gibe III dam - that has the capacity to double the country’s electricity output. The 243-metre (800ft) dam on the Omo River was opened after years of delay, partly due to funding shortages.

Gibe III is the latest in a series of dams that have been built by the government. Next year it plans to open the an even bigger dam, the Grand Ethiopian Renaissance Dam on the Blue Nile.

The dams have the potential to turn Ethiopia into a renewable-energy exporter. According to the Economist, Gibe III alone is expected to generate as much electricity as currently produced by the whole of neighboring Kenya. Hydropower export earnings will help fix Ethiopia’s large account deficit; the cheap power will also support Ethiopia’s growing manufacturing sector.

Funding has been a problem. After the African Development Bank, the World Bank and the European Investment Bank had declined to finance the project directly, the Ethiopian government put up the cash itself, supported by a substantial Chinese loan. Furthermore, as the operation of Gibe III is believed to have consequences downstream for the hundreds of thousands of people, activists are skeptical.

Most people in Africa prefer to drink tea, but not Ethiopia. In 2015, 127,000 tonnes of coffee was sold for local consumption in this country.