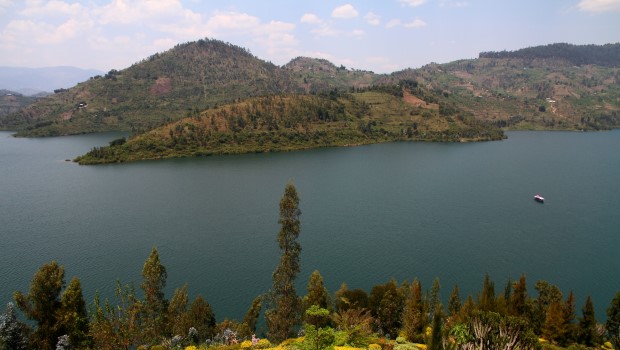 Lake Kivu could be the Rwanda’s future source of energy, as it contains about 60 billion cubic meters of methane gas. In order to provide electricity for the region in the future, the government has started a pilot project to extract methane gas from the lake.

CNN reports that the lake has the power to produce up to 800 megawatts. Currently, only 20% of Rwandan homes have power, and it is estimated that it will take at least 1,000 megawatts to power the country by 2020. The project is still in the early stages, with the plant currently extracting a mere 2.4 megawatts of power.

The methane resides 250 meters underneath the lake. To extract it, engineers lower a pipe to just about the layer of dissolved gas. Once captured, the gas is purified and dried. Overall, it's a cheap method for creating electricity.

There is a downside to having a methane-rich lake like Lake Kivu in an area., that attracts tourists, a welcome income source for Rwanda. Because of the area's volcanoes and anaerobic bacteria in the water, the lake is susceptible to underwater eruptions. The sudden release of a bubble of CO2 can lead to a violent and deadly explosion, like the one that killed over 1,700 people in Cameroon in 1986. To prevent the lake to ‘explode’, the Rwanda government has put in efforts to ‘degas’ the lake.

Andrea is a travelling journalist, sharing her impressions of Africa. A new innovative way to provide energy in Africa is the powercycle.