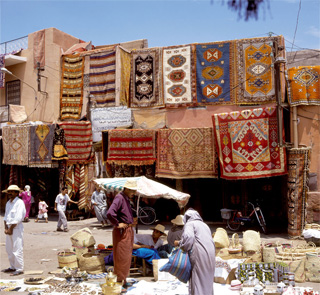 Morocco is rapidly becoming China's new tourism hotspot. During China's Golden week, a relatively large portion of China's international tourists has touched down in Morocco's souks and deserts to get a taste of North African life.

During Golden Week, a seven-day holiday in China, many people travel to South Korea, Thailand and Japan, the most popular travel destinations for Chinese tourists.

This year, there was a 3500% year-on-year increase in visa applications to Morocco, says Ctrip, a Nasdaq-listed travel agency based in Shanghai.

Quartz reports that the sudden interest in Morocco may be the result of a relaxation in visa requirements and appreciation of China’s currency. Morocco just joined 57 other countries and regions that have relaxed or eliminated visa requirements for Chinese citizens this June.

Dangote: "I need 38 visa to move around Africa"

Nigerian national Aliko Dangote, the richest businessperson in Africa, finds it hard to accept that travelling across the continent is so hard.

Ivory Coast back in Top 10 of attractive investment destinations

Ivory Coast is back in the top 10 ranking of the annual 'Where to invest in Africa' investment attractiveness survey, compiled by Rand Merchant Bank (RMB).