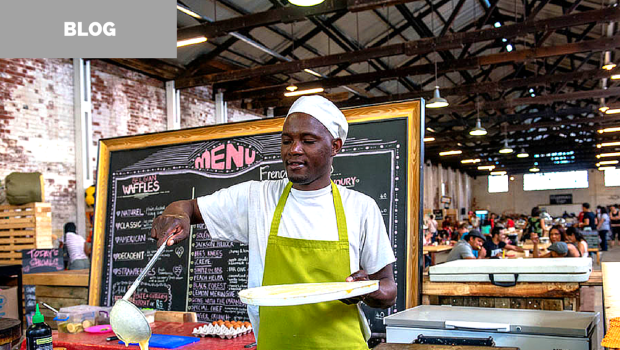 An old dynamite factory and a deserted parking lot. Unlikely settings for food markets, yet they help transform a once dangerous downtown Johannesburg into a multicultural, pleasant neighborhood.

“This was definitely a no-go area”, Alexis Oosthuizen says after taking a sip of her freshly squeezed fruit juice, sitting at one of the long wooden tables in de industrial-looking hall with corrugated roof, wooden columns and concrete floors. Only recently this former dynamite factory started to host the Shed@1Fox Market every weekend. Young entrepreneurs sell fresh oysters, frozen yoghurt, waffles, spicy Italian sausages and freshly prepared sandwiches in stalls made out of pallets. Visiting this market is a first for the 36-year-old anesthetist. “A very good reason to finally visit this part of the city”, admits Oosthuizen living in one of Johannesburg’s suburbs.

Downtown Johannesburg was a whites-only area

Under apartheid, this so-called Central Business District (CBD) was classified as a whites-only area. Many disadvantaged black people moved into the area after the abolition of apartheid, often taking over entire buildings. Buildings became empty when businesses and residents moved to more secured offices and houses in the Northern Suburbs, a crime wave swept through the city center and by the late 1990s downtown Johannesburg was a no-go zone and virtually a ghost town. 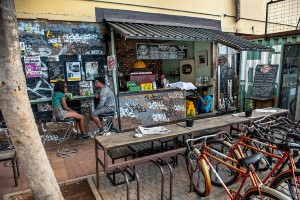 In collaboration with various larger companies, the South African government has recently started to redevelop the area, for example by installing CCTV cameras causing crime rates to drop dramatically, by building modern apartment buildings and by reopening several offices. Now by organizing trendy food markets they try to lure people from the suburbs to Downtown Johannesburg. And it really does the trick.

South Africans dressed in fashionable clothes from all ethnic groups of the rainbow nation come to the Neighbourgoods market in Braamfontein and the Market on Main in Maboneng in large numbers every weekend. They feast on cocktails, micro brewed beers, Chinese dim sum, Ethiopian injera, Spanish paella, Lebanese hummus, Greek souflaki and plenty of other dishes freshly prepared in dozens of food stalls. The vibrant atmosphere is continued further in the shops and bars surrounding the markets.

“When we go to totally white areas, people often stare at us”, says the 44-year-old Ayanda Makaula while folding her long, thin braids behind her ear. “But here people are really mixed together, just like the food”, the business woman in a short denim dress laughs, while taking another bite of her paella with prawns, prepared earlier in a two meter wide frying pan.

Although less visited and yet to be discovered by most people, Shed@1Fox market is a platform for young entrepreneurs starting their own business, says the 42-year-old Hugo Lombard. “It´s also a backlash against the many highly commercialized shopping malls spread all over South Africa”, the lawyer believes, dressed in polo shirt and shorts. “All you see there are the same shops every time while here you will find something different and new in an exciting, interesting building.”

Some visitors are more skeptic, though. “Blacks and whites do visit these markets but they still don’t mix”, the 32-year-old Bongani states as he takes another sip of his beer. “If white South Africans keep being afraid of black South Africans, this won’t change”, the young, black ICT programmer in shorts and fishing hat with floral print sighs. And indeed, at most tables a group of white or a group of black South Africans are sitting together, but is a group rarely blended.

“This is the real South Africa”

However, by most visitors the upcoming markets in Downtown Johannesburg are seen as an opportunity for all ethnic groups to finally meet and mix. This also applies to the 37-year-old blond Charlene Muller: “In other places often only one ethnic group is represented while these market places finally show the mixed, vibrant and real South Africa.”

More information you can find at:
Shed@1Fox Market
Neighbourgoods market
Market on Main 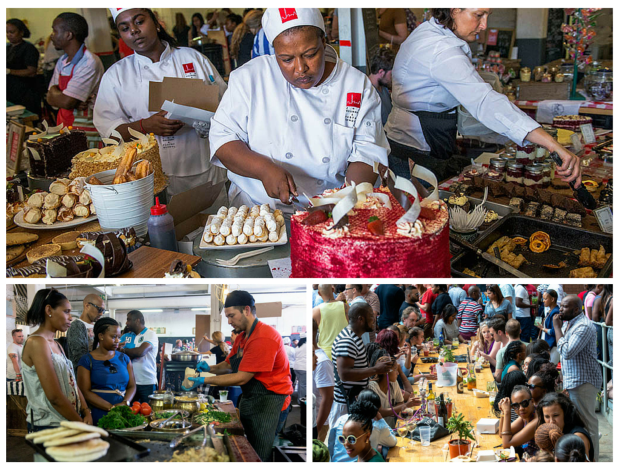 The Kenyan Emo Rugene is founder of Afro Shoes which he also sells in America and Europa. He is a big proponent of boosting the African shoe industry.

Mkulima Young is an initiative that supports young farmers looking for new initiatives. Farming is becoming ‘hip and happening’ in Africa.