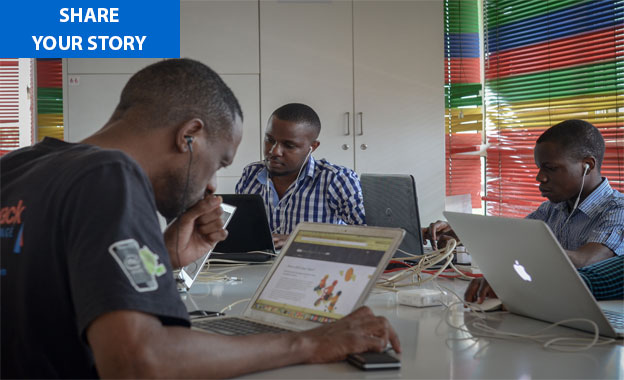 The new solution to the shortage of ICT professionals in Europe comes from Africa. Start-up Tunga finds developers in countries such as Nigeria, Egypt and Uganda via its local base in Kampala. David Semakula, Tunga’s CTO in Uganda: “Serving Tunga’s customers, we connect over 300 developers, mainly in Uganda, Egypt and Nigeria.”

With their Amsterdam start-up Tunga, Ernesto Spruyt and Bart Leijssenaar second African ICT staff to companies in several European countries. There is a co-working space in the Dutch capital, but the ‘real’ work is getting done in similar offices in Kampala and in any other place that the 300 IT-specialists in Tunga’s pool like to work. Smaller tasks and bigger jobs and projects in the area of software and web development, coming from clients in many European cities, find their way via the Tunga-network to qualified Africans. There is lots of talent on the continent. Tunga builds on the pioneering work of Butterfly Works, a foundation that, with a development programme in Africa, has given ten thousand young people a free ICT training.

The Tunga solution works two ways. Organisations with ICT needs get serviced on a professional level from developers in Africa, at a reasonable rate. Getting this kind of support is getting more difficult every year, as the shortage of ICT professionals has reached 900,000. Ernesto Spruyt: “For the African developers that have joined the Tunga pool, the earnings are good. Especially when you consider that work is not on the cards for young people in countries like Uganda.”

In Kampala, David Semakula (29), Tunga’s Chief Technical officer, could not agree more. “After university, I got an internship with a company that installs software and manage databases for companies such as Oracle, IBM and Google. I did not stay very long, as I felt I needed more challenges. I am good at what I do and want to exercise my creativity. I tried to have my own development business, but there are not enough local companies with the type of challenges that require my services. In Uganda, I met one of the founders of what later became Tunga: a platform of African IT talent. I liked the challenge of software development that Tunga’s clients are offering.”

David immediately fell for the concept of a business that offers exciting smaller and bigger jobs for international projects. “I got in touch, got started on my first jobs. Soon I did jobs like solving software and web development issues or add a new feature to a web solution. When the job was done and the problems fixed, I filed my report. Soon, small jobs became bigger jobs, sometimes for weeks and months instead of days.”

Over the four years that followed, Tunga matured. The clients as well as their project got bigger and more challenging. David still works as a software developer for Tunga’s clients.

He is now the company’s Africa-based Chief Technical Officer (CTO). “Tunga professionalized, in many ways. Today is has grown to become a real platform that serves Tunga’s customers and connects over 300 developers, mainly in Uganda, Egypt and Nigeria and also a few in Kenya. When there is a job, we find the developers that have the right expertise and that preferably have worked on similar issues before. If a team effort is required – in cases that are bigger and more time-consuming, Tunga gets the team together, cooperating via various tools and platforms, such as Slack – our community tool. In this world, the jobs one did basically show the level of professionalism – your work speaks for you. Someone who is less experienced and skills in certain area is teamed up with a more senior developer.”

The small tasks and quick fixes that Tunga’s developers used to solve in the early days have now become large projects. “We transitioned to working more project-based, that sometimes take more than a year. Our project managers in Uganda take care of sourcing the right people via Slack – the put new projects out there and find the developers that are interested. They also plan and monitors the projects.”

David’s message to IT-specialists and talents across Africa is: “If you are interested and you have the skills and the experience, come join us and be part of our pool of IT-workers. There is still plenty of seats on our bus.” Egypt’s smartphone maker Silicon Industries Corporation (SICO) is targeting the African continent with mobile phones that are assembled in Egypt.

In South-Africa, ONYX Connect is preparing the mass production of the first smartphone on African soil. The ‘ONYX’ wil market for as little as $38.