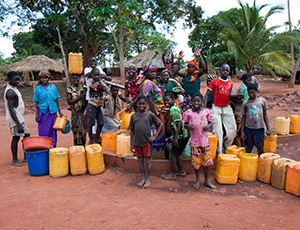 Tanzania is constructing a €254 million water project to cater for companies and villages in the oil & gas region of Mtwara. The project will supply the region with 120 million litres of water daily from Ruvuma river.

Mtwara is rapidly becoming one of Tanzania’s economic engines. It has become the centre of attraction to investors as more seismic acquisition and exploration drilling create demand for specific and specialized services the gas and oil companies.

The water project will triple the current water supply. According to a report by CNBC, the water is to support the livelihood of people living in the area, with infrastructure under increased pressure from population growth and booming economic activity. Gas and oil exploration and extraction has attracted a great number of industries to the region.

According to a government official, the technical part of the project, including the feasibility study and evaluation for compensation of potential evictees to pave way for the project, has already been done. The project is a combined effort by the governments of Tanzania and China. China will finance the project through a soft loan.

China’s Export-Import Bank is lending Tanzania €6.7 billion to build a railway line that will link the country to Uganda, Rwanda, Burundi and DR of Congo.