Mammoet, the global specialist in engineered heavy lifting and transport of oversized and heavy objects, has set a – literally – huge world record in West Africa. In Lekki, Nigeria, the world’s heaviest regenerator (3000 ton) was erected by the world’s biggest crane for the world’s biggest ‘single train’ refinery. The job, issued by the Dangote Group, was handled successfully.

The site where Netherlands-based Mammoet handled the job is special. In Lekki, Dangote Petroleum Refinery construction project is one of the largest industrial development projects carried out in the history of Nigeria. The massive landmark project is – according to Dangote Group – scheduled to be completed by 2020. In the building process, several large components that have been manufactured overseas have to be put in place. Lifting these installations from ships in port to their final destination in the Dangote – 10 kilometres down the road – is a job that very few operators in the world can handle.

“As the specialised heavy lifting and transport contractor on the Dangote Petroleum Refinery construction project, Mammoet has successfully and safely received and transported the majority of heavy refinery components for the project,” Mammoet proudly announced the news of the heavy regenerator lift in a press release.

Largest item ever over public road

The 3000-ton regenerator is the heaviest item ever to be transported over a public road in Africa. Mammoet’s careful planning and execution, along with the strong support of Nigerian partner Northridge Engineering, have ensured all vital components are delivered to site safely and on schedule.

Mammoet received the cargo at the new Dangote Quay Lekki, which was specifically built for the project. The components, ranging in weight and dimensions, were either received from the ship’s hook onto SPMTs (Self Propelled Modular Transporters) or directly loaded off from Ro-Ro vessels. They were then transported over a 10-kilometer road to the refinery site. Once on site they were placed into storage on a freshly paved Enviro-Mat, Mammoet’s sustainable solution for ground reinforcement, which is also being used to provide the main crane hard stands.

Such a large-scale project requires extensive ground preparation works before any lift can take place. So in addition to the heavy lifting and transport contract, the company’s subsidiary - Mammoet Heavy Duty Pavement has been contracted to apply Enviro-mat, Mammoet’s innovative and sustainable solution for ground reinforcement.

Enviro-Mat provides an efficient, cost-effective and sustainable alternative for ground reinforcement. Combined with the native soil and cement, the Enviro-Mat additive increases the ground bearing capacity up to 50 tons/m². It is also quick to install and therefore offers particular advantages on sites where ground reinforcement is required on a large area within a short timeframe. Mammoet successfully applied the product to lay down areas, hard stands and crane pads equating to over 500,000 square meters of the site, which is located on reclaimed swamp land.

To optimize the construction process, Mammoet has drawn on its diverse fleet of equipment. This includes SPMTs, and mobile and crawler cranes ranging in capacity from 250t to 1250t. Mammoet also uses its largest lift ring cranes with lifting capacities up to 5,000 tons to bring maximum efficiencies to the execution of the project. Both components, the regenerator as well as the reactor, have been successfully lifted into their final positions.

The $10 billion refinery is situated on a 6,180 acres (2,500 hectares) site at the Lekki Free Zone. When finished, it will process about 650,000 barrels of crude oil daily, transported via pipelines from oil fields in the Niger Delta, where natural gas will also be sourced to supply the fertilizer factory and be used in electrical generation for the refinery complex.

Another superlative: with a single crude oil distillation unit, the refinery will be the largest single-train refinery in the world. At full production, the facility will be able to produce 50,000,000 litres of gasoline and 17,000,000 litres of diesel daily, as well as aviation fuel and plastic products. With a greater capacity than the total output of Nigeria's existing refining infrastructure, the Dangote Refinery will be able to meet the country's domestic fuel demand, as well as export refined products. 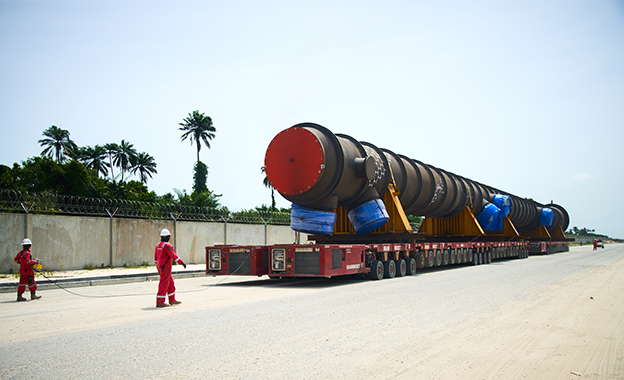 The new €15 billion refinery project in Nigeria, to be built by Dangote Industries Limited, is expected to create over 300,000 direct and indirect jobs.