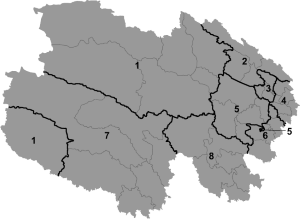 China is building a new airport, to offer the north-western Qinghai Province a better connection to the rest of the country and the world. The airport site is situated in the border region of Qinghai and Xinjiang.

The airport will be a major economic factor, as the region is China’s major petroleum and potash fertiliser base.

All of the destinations that AIR FRANCE KLM offers in China, what weekly frequencies, the routes and stops on the way.