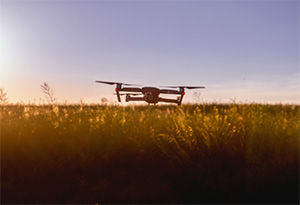 In China, farmers are adopting the use of agricultural drones to spray their crops with pesticides, weed-killers, and growth regulators. Agri-drone companies offer farmers to take over the time-consuming and labor-intensive work for a few yuans per acre.

Sixthtone reports that, in December 2015, there were 100 companies in China producing agricultural drones. Number released by Industry analyst iResearch indicate that investments in drone companies have boomed from 65 million yuan ($9.4 million) in 2013 to 1.7 billion yuan in 2015.

The manufacturers have recognized the vast potential for drones in commercial agriculture. Drones can spray crops 30 to 60 times faster than a farmer can with a tank strapped to his back. The efficient, even spraying that drones are capable of, this method uses half as much chemical formula and 90 percent less water.

According to estimates, there are currently more than 2,300 agricultural drones in use in China. Experts says that in 2020, 100,000 drones and 400,000 pilots will be required to meet demand from the farming sector.

Further reading on The News Lens

In Tianjin, the authorities have closed down underground factories that counterfeit versions of products like soy sauce and spice mix.

Local workers no longer favor foreign multinationals as their employer. Research shows that homegrown businesses are beginning to catch up.