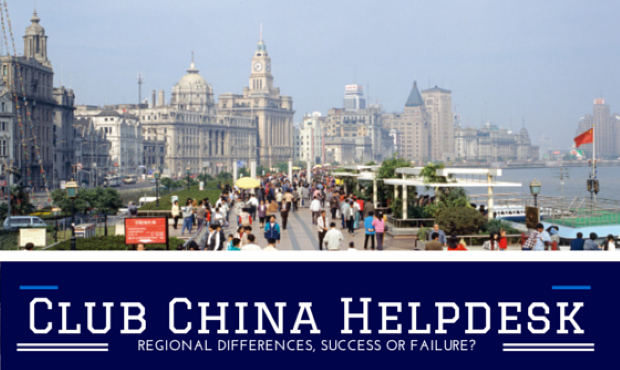 “Does it make any difference what part of China I choose to set up business? Are there any differences in local legislation and in legal practice that can make or break my business?” We asked our Club China Helpdesk experts to offer their visions and experiences in this area.

“It is important to understand there are considerable differences between regions and even cities and counties in China. Think about dissimilarities in GDP per capita, retail spending, infrastructure, etcetera. As a foreign company you should therefore aim to gain a good understanding of where your target market is first. For instance, Philips markets its most advanced shaving machines in the country’s largest cities, and its more basic versions to consumers with lower purchasing power in smaller cities.

Business is also done differently depending on the region you are active in. Case in point, whereas in Wuhan you can expect your business partner to treat you to lavish dinners accompanied with copious amounts of alcohol, in Shanghai you can expect a more Western straightforward approach to business. Regions, cities and counties also compete with each other for foreign investment by providing attractive incentives to companies. This often comes in the form of loosened regulations, attractive land leases and favourable tax conditions.

To summarize: there can be substantial differences per region. Conducting market research beforehand would therefore be wise in order to gain a better understanding of your opportunities and challenges.”

“China is one of the largest countries in the world and like any large or small country there are differences in habits and langue from North to South and West to East. China is a centrally regulated government and in principle on the government side there cannot be differences between for example setting up a company in Beijing or in Guangzhou or Wuhan. This is the logical way of looking at it but for sure in practise western business people can encounter detail differences in the procedures. Also, some regions offer more tax benefits than others.

When you are in business in China, you should not forget that – when procedures have to be followed – you are dealing with government officials, people who need to execute the law. And since making mistakes is similar to ‘losing face’ you will experience that in various regions and cities processes can be slower or faster. Even in a small country like The Netherlands there are cultural differences and ‘local habits’ in doing business!

Some regions in China have a lot of experience in doing business with westerners and some have very little. Basically the way of doing business is the same, but in China it takes more time to close a deal, with all paperwork that comes with it. The speed at which procedures are handled can also depend on whether you work with a private or state-owned company.

China is a complex country, with a business culture that is deeply rooted in history. For Westerners it will always difficult to understand their way of doing business. And since up to now 80% of the Western companies fail in China within the first 3 years, my best advice is to get help from local consultancy companies. They know the rules and regulations but above all - they know the local business practices.”

“Although the national industry policy and tax incentives are statutory, the local government is allowed, or even encouraged, to provide additional preferential policies to attract foreign investment. These preferential policies, such as cheaper land rent price, financial support from local government and flexible policies on bank loan are largely dependent on the financial ability of local government. Therefore, the more wealthy coastal areas normally provide more favorable policies compared to other areas in China. Take the subsidy on R&D centers for example. Shanghai Pudong local government can provide up to RMB 5 million subsidy for a state-level R&D center while in Chengdu, the capital of Sichuan province, the subsidy is only RMB 1 million at most.”