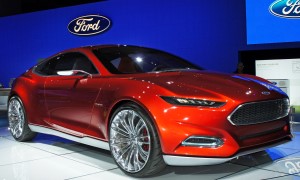 After two years of construction and an investment of € 702 million, Ford’s brand new auto assembly plant in Hangzhou has opened. The highly efficient production line is capable of producing one vehicle every 72 seconds.

The opening of the new plant in Hangzhou makes Ford (together with its joint venture Changan Ford) the third biggest foreign carmaker in China after Volkswagen and GM. This plant, with an annual production capacity of 250,000 cars, is Ford’s sixth base in China.

With the launch of the Hangzhou plant, total annual capacity of Ford’s China joint venture, Changan Ford, will be 1.4 million vehicles.

The first vehicle being manufactured at the plant is the new Ford Edge. This new Ford Edge is a global product, which made its global debut at the 2014 Guangzhou Auto Show. The vehicle features a third row which was specifically designed to meet the needs of Chinese customers.

The EVCARD program is a new electric-car rental program in Shanghai that is aimed to give local consumers a taste of new energy driving.