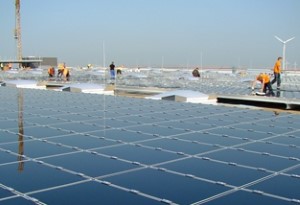 Chinese solar cell manufacturer Hanergy claims it will build China’s first solar-powered car. Hanergy says that it is cooperating with five design companies and that it aims to develop – not necessarily produce – solar-powered cars by October 2015.

The goal is to reveal three to five concept cars by that time. It usually takes two or three years for cars to go from the drawing board to the assembly line.

Hanergy reaffirmed its auto industry goal to The Wall Street Journal. Previously, Hanergy worked close together with Aston Martin on solar-power applications for racing cars. It has also worked on Tesla superchargers in China and installed solar panels at the Chinese car plants of brands such as Volkswagen and Honda.

Hanergy’s auto ambitions are based on its thin-film solar technology, called gallium arsenide flexible thin-film module. The company claims that a one-ton vehicle covered with six square meters of thin film on the roof and exposed to four hours of normal sunshine will be able run for 80 to 100 kilometres.

The city of Chengdu, located in China’s west, has filed plans to raise the city’s greenery coverage rate to 42 per cent, to become China’s green city.

Only 1 in 18 succeed in car license plate auction

Getting a license plate for your car is not easy in some Chinese cities like Beijing and Shanghai. At a recent auction in Shanghai only 1 in 18 bidders suc