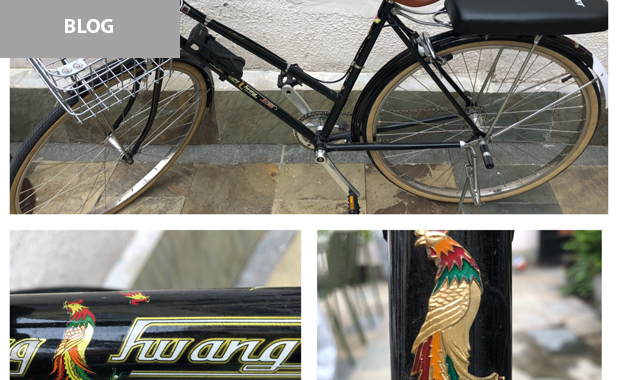 I have written about the spread of shared bikes in Shanghai before. Since that article was published, I’ve changed my usage habits quite a lot. I am a big fan of biking and using public transport whenever possible in Shanghai. Both are ubiquitous and inexpensive ways to get around, but I found myself growlingly frustrated with the quality of the shared bikes around town.

But when a quick trip to the gym took no less than four different shared bikes to get me there (the lock wouldn’t open on the first bike I tried, the second one’s chain was off, and so it goes…) I decided to plunk down the cash for my own wheels.

There are all sorts of bicycles available on Taobao, China’s ultimate shopping website, and I admired a few but wasn’t sure about delivery (would I have to put it together?) and quality. I wanted to see what I was getting before I decided to buy.

I was admiring a friend’s fancy ride – cool mint-colored frame and white wall tires, sturdy chrome basket with a wood-paneled bottom – when she told me about 2Wheels, a tiny, father-son set-up in the Former French Concession. Now with a little dog to tote to the dog park on the West Bund and an eight-year-old who no longer fits in a bike seat, but still needs to be pedaled around to activities, I thought they should be able to fix me up with something customized.

When I arrived, the owners were busy with other customers, so I looked at a few bikes outside and decided on an ultra-retro Feng Huang black bicycle. ‘Phoenix’ in English, Feng Huang is Shanghai’s oldest bike brand. Established in Shanghai in 1897 under the name Tongchang, Phoenix Bicycles now produce over 40% of the world’s bicycles (read more).

My Feng Huang bicycle is a simple, single-gear, women’s model. The black frame and classic logos give it a retro look and make me feel like I’m riding on a little piece of history. I ordered an extra-large basket for the front and a seat with foot rests for the back.

My timing may not be perfect as Shanghai is starting to get cold and pretty soon my daughter isn’t going to want to shiver at my back while I pedal her to her design classes. But for now, errands and trips to the dog park are a little more fun with my own new/old bike to get me there.

2Wheels is located at 699-4 Julu Road near Xiangyang Road in Shanghai.

Weekending in Shanghai – The West Bund

It’s easy to spend the weekend in your hotel room in front of your laptop. Why not combine exercise with culture when you are visiting Shanghai?

Shanghai Tower - Standing at the Top of China

The Shanghai Tower (632 meters) is in soft opening stages. Sara Naumann was invited to have a sneak peek with local tour operator Bespoke Shanghai.