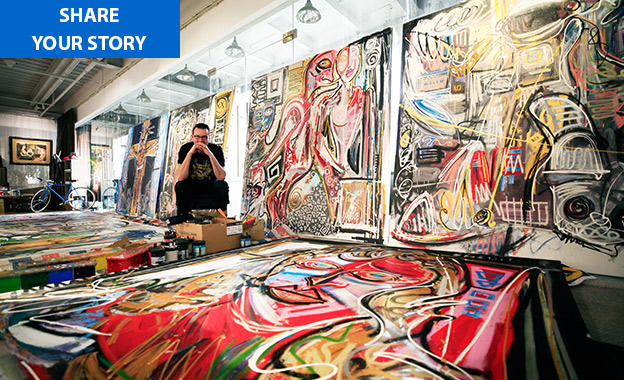 You may have seen the paintings of Peter Riezebos in the Shanghai Museum of Modern Art. You may even have met the artists at one of his recent live painting shows at a gallery or in one of Shanghai’s hotels. Peter Riezebos from The Netherlands is hot in China. “I am both an art entrepreneur and an artist. In Shanghai, the upcoming art capital of the world, one needs to be both to be successful.”

When Peter Riezebos first landed in Shanghai in 2009, the metropolis immediately won his heart. After he took part in an exchange program for his academic studies of communication science and psychology, he decided to stay. “This city, with its vibrant environment, cultural heritage, rapid development and energetic people, is the world’s new New York. And, in my opinion, the future global art capital!”

Today, Riezebos’ life is developing along two different lines. He is in the process of finishing his PHD (‘Educational Technology’) at a Shanghai university. At the same time, his life as an artist has – to put it mildly – taken off nicely. Working from both his large private studio in the Art GoGo complex and at a workshop the university has provided him, he has taken the Chinese art society by storm. His extremely colorful and powerful ‘neo-expressionist’ style is greatly admired by Chinese art fans and his paintings usually sell at tens of thousands of euros.

Too shy to sell work

His painting career did not take off by itself. “I started painting long before I came to Shanghai, but I was too shy to sell my work. In my first year, I sent hundreds of emails without receiving answers. I had little sleep, worked on my PHD in the morning and painted in the afternoon and evening. But I did not give up until I got noticed. I did presentations in shopping centers, without pay. I offered to show my work in restaurants, free of charge. In 2013, I sold my first painting.” “One thing I have learned: success does not come by itself. My schedule is always full, with presentations, photo shoots, interviews and dinner appointments, often two or three per evening. It is hard work!”

Shanghai turned out to be a very inspiring place for the artist. As his style developed, he did away with his early ‘shyness’ and became very productive. “Shanghai has given me the clout to develop myself both as an artist and as an art businessman, selling my own work. In Shanghai, you won’t make it to the top if you stay in your workshop. You need to go out to sell your work, in a quite literal sense. It involves doing projects with my art agent, presenting collections in galleries and museums, even doing live painting shows.”

Riezebos insists that the energy in the well-developed art scene is good and there is a lot of money going round. “Middle and upper class Chinese are getting more art-savvy. At the same time, they like spending money on art as an investment.” Riezebos applauds the interest that many locals in Shanghai have for ‘the arts’. “People spend time and money in the development and ‘growth’ of their kids. After school, many kids go to art, music and ballet lessons. There is a good art vibe in this city.”

This summer, Riezebos was hired to paint live for an audience of one thousand art lovers in the Ritz-Carlton. The live painting has become part of his promotional repertoire. Peter likes to involve his audience in his painting session. “Live painting is my way of being transparent. In a few hours, the audience can see what materials I use and what techniques I apply. I can focus well, but it definitely is a thrilling experience to do it while an audience of hundreds of people is watching, kids too. Sometime I stop to explain what I am doing or what I am trying to achieve. In a painting show I reveal myself as the artist who tries not to stay in his ivory tower. I try to be accessible and to interact with my audience.” These and other activities help develop Riezebos’ bond with his growing number of ‘fans’.

It is safe to say that Peter Riezebos’ art is hot in China. “I consider my show in the Shanghai Museum of Modern Art as the confirmation of my current status. It attracted large crowds and my work sells well. I enjoy being successful, but I don’t necessarily enjoy being in the media all the time. I do understand that, in the China art market, I need to be both the artist and the salesman. Painting, opening shows, doing photo shoots, handing out autographs: it’s part of being an artist in China. I can take admiration by the people – it’s genuine, people want you to have success and to enjoy it.”

What does the future hold for Peter Riezebos? “One would expect I would like to become a world-famous and dedicate my life fully to the arts. This may come as a surprise: I want to be successful and make a living with my paintings, but dedicate at least one or two days a week to my intellectual and scientific work. I convinced myself I would always have a two-track career, combining painting and science.”

It is very likely that Riezebos will work for many years in Shanghai. “I do believe this is the right place for me. Christies’ experts could very well be right that Shanghai and also Beijing may take over the position of London and New York in three to four years. Art has found a great breeding place here.”

This is where Peter Riesebos art will be exhibited (check Peter’s website):

One could easily say that Felicitas Speth von Schülzburg is in the ‘imagination business’. She introduces Chinese dancers etc. to western stages.

Hong Kong hotel entrepreneur Girish Jhunjhnuwala became ‘2016 EY Entrepreneur of the Year’ for the Hong Kong and Macau region with his Ovolo Hotels.