Since the winter of 2017 Edwin and his team of Loopper.com in Amsterdam – specialized in developing promotional gifts – have been working on this adventure. The entrepreneur’s idea arose during a business trip to suppliers in China. When the team was out to dinner in Shenzhen, the quality of the fries left something to be desired. From that moment on, Edwin had the idea for Royal Patat. After several researches in China and local tastings, Edwin decided to put the concept on the Chinese market.

When researching Chinese food preferences, Edwin found that the fries market in China is growing at high pace, by about 10 to 15 percent a year. “This is mainly because the economy is growing and people want more of these kinds of products. Previously, only McDonald's and KFC sold fries, but now many restaurants also serve the product. The quality, however, often leaves much to be desired. The product is often deep-frozen fries and the oil is not good. The temperature is too low and they also bake other products like fish in it. Altogether, it is not the way to deliver top quality fries.”

To get the best results, Den Hartog teamed up Ruben de Hoog, a chemistry student who worked as a sideline job at one of the best fries shops in Amsterdam. Edwin: “Ruben is a real specialist. He's the one who's going to be monitoring the quality in China, based on a freshly cut and baked potato.”

Royal Patat in Shanghai will open as a small takeaway shop in a narrow alley near the West Nanjing Road metro station in Shanghai. “This is where 700,000 people a day pass by, spread over a number of exits”, Den Hartog knows. We suspect that around 70,000 people pass through our alley every day. It's about 5 metres wide, and people walk all day long.”

The walls of the shop are designed by graffiti specialist Hugo Kaagman, in Delft Blue-style.
The entrepreneurs have an area of about 16 square metres in which everything has to be done. The potatoes are cut in the shop and various toppings, designed to fit the Chinese taste, are also made in the kitchen. Royal Patat has a storage area downstairs, and at another location in the city to store potatoes.

At Royal Patat, fries are available in different portions and designs. A small portion costs about €2.90 with unlimited ketchup. The most expensive fries, about €9.95, are Royal boxes with shrimp and stew. In addition to the regular cone, there is the Royal Cone with three separate sauce boxes. There are 18 sauces on the menu, developed in collaboration with a manufacturer in China. In addition to mayonnaise, there are spicy mayo, truffle mayo, duck egg sauce, chocolate sauce, strawberry, spicy mango, cheddar cheese and Asian barbecue. Every three months there are new flavours.

Den Hartog: “We had the sauces tasted by a Chinese test panel. China is not a sauces country, so they go in blank. They don't know any mayonnaise there, so that's just as unknown to them as fries with strawberry sauce or chocolate sauce.”

The success is in the potato

As every French fries ‘connoisseur’ knows, part of the product’s success is in the raw material: the potato. The entrepreneurs closed a deal with China's largest farmer, who has plantations in the north of the country. “He is going to sow our own specific potato, the Royal Patat potato”, says Den Hartog.

Promotional activities have already started. “We are going to set up a large social media campaign. Social media is very important in China if you want to get something done'. The finishing touch to the operation: training of personnel, to get every portion of Royal Patat’s product perfect.

“If this store goes well, we want to open a few of them ourselves, and then franchising is an option. Shanghai is a city with a huge vibe, and that's where it's happening in China. It is a kind of New York 2.0. There are 24 million people living there, one and a half times as many as in the Netherlands, with zero French fries shops. We'll be the first.” 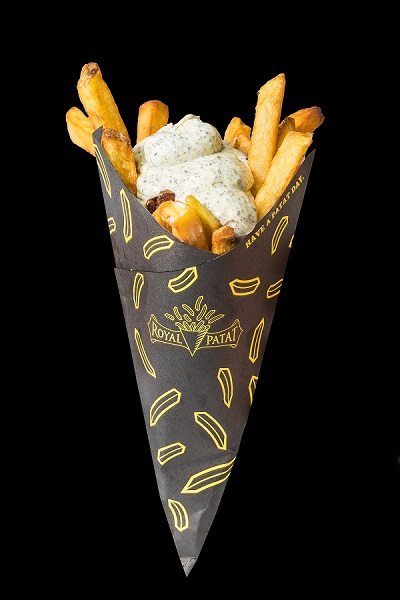 How international brands sell their products in China

“Kroketten and bitterballen, anyone?” | Member story