A new airport for Beijing

China will build a brand-new airport for its capital Beijing. The new airport, to be positioned near the Hebei province border, will have a capacity of 72 million passengers per year, and two million tonnes of cargo. 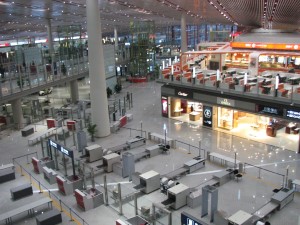 About 60 5-star hotels are hoping to downgrade their rating to 4 stars, following a government ban.

“Beijing will become busiest airport in 2014”