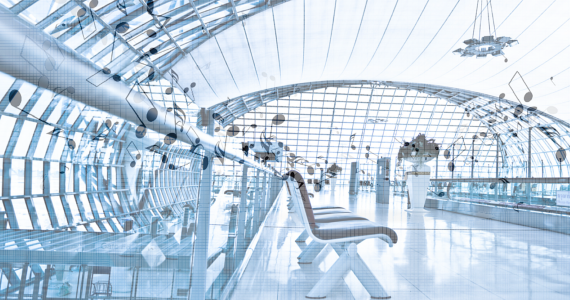 Today’s modern airports want their passengers to enjoy their transfer hours as pleasurable as possible. The latest weapon to win the waiting air traveller’s heart is music, preferably played live. For fun, exciting and relaxing moments between concourses A and C and on your way from gate A5 to F19: a live band!

Airport World analyses the new trend that has three goals: to enhance the traveller experience, boost non-aviation revenues and raise their profiles as a great location to change planes in global travel.

One of the leaders in this new musical trend is Seattle-Tacoma International Airport (Sea-Tac), which has launched a three-year music programme called Experience the City of Music to showcase the city’s musical heritage. The airport is permanently staging live music performances after a pilot in 2013 earned rave reviews from passengers that enjoy the blues, folk, rap, rock and pop performances. An airport spokesperson: “We have had 90% positive feedback since we introduced it and it has really enhanced the experience and ambience and helped boost revenues.”

Another airport that has attracted attention for its live performances is Tampa International Airport (Florida). Each Flight Night has a different theme, and past events have included a German night, St Patrick’s Day Irish music, a Bollywood theme and a reggae session.

Austin-Bergstrom International Airport is one of the leading lights in music programmes in the US, that is advertised as: ‘We are the Live Music Capital of the World and there’s Music in the Air the minute travellers step into the terminal’. At the Austin airport, local musicians play from Monday to Friday at several venues. Other airports known for their live music entertainment: Nashville International Airport, Singapore Changi and Seoul Incheon, featuring live piano music. China’s Shenzhen International Airport recently started hosting the Shenzhen Symphony Orchestra every Thursday, which welcomes passengers after their long journeys and performs pieces by Johann Strauss and Bach.

In Europe, Geneva and Zurich airports are known for featuring the Montreux Jazz Café.

The best way to beat business travel stress is to be aware of the three common stress causes.

Do you book a hotel because of the chocolate you get on your pillow? We guess… you don’t.

Between flights, enjoy a Michelin-rated meal

What do you prefer while you spend your connecting time on an airport?