Carbon capture, a great idea. But how does it work?

Airbus, Air France-KLM, Virgin Atlantic and a number of other airlines have confirmed their intentions to jointly develop Direct Air Carbon Capture and Storage technology. In a nutshell, they want to capture CO2 emissions – up to 1 million tonnes per year from a single facility – directly from the air. The CO2 can be stored safely and permanently under ground or used for the production of synthetic sustainable aviation fuels. But how does that work and what can it bring aviation - and society? This cool video explains it all.

What are we talking about? Scientists call it Direct Air Carbon Capture and Storage (DACCS). According to Airbus, DACCS is the emerging technology that is poised to help the airline industry move closer to #netzero targets. It removes human-induced CO2 directly from the air. It is a technology that has great potential, as it could help multiple industries meet their net-zero carbon emissions targets. For hard-to-abate industries like aviation, it may become a promising complementary solution to sustainable aviation fuel and hydrogen.

Airbus, in the explanation it offers on its website: “A direct air capture – or DAC, for short – facility acts like a large-scale, highly efficient tree: it sucks air out of the atmosphere and extracts the CO2 present there. In 2030, there will likely be dozens of them around the world.”

The video about DACCS

The aircraft manufacturer prepared a short animation video to explain how it works. In three steps:

1
A large fan draws air into an air contactor, which is modelled on industrial cooling towers. The air passes over thin plastic surfaces with a non-toxic potassium hydroxide solution flowing over them to trap the CO2 molecules as a carbonate salt.

2
The carbonate salt is separated from the solution using a pellet reactor. The carbon pellets are then heated in a calciner to release the CO2 as pure gas. Lastly, the processed pellets are hydrated in a device called a “slaker” and recycled for use in the original capture solution.

3
The captured pure CO2 can then either be stored underground or reused for the production of, for example, Power-to-Liquid fuel through a complementary process called AIR TO FUELSTM.

In a recent LinkedIn post, Fatima da Gloria, VP Sustainability at Air France-KLM, aired her excitement about the joint carbon capture initiative. “By joining our strengths with Airbus and other airlines we aim to advance the knowledge and experience around this emerging technology in order to improve its price and efficiency. It may become an important part in the toolkit of technologies used to achieve climate goals”, Fatima da Gloria stated. 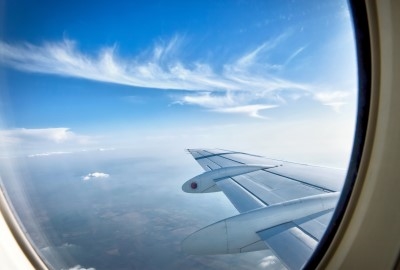 1 minute
Back to top