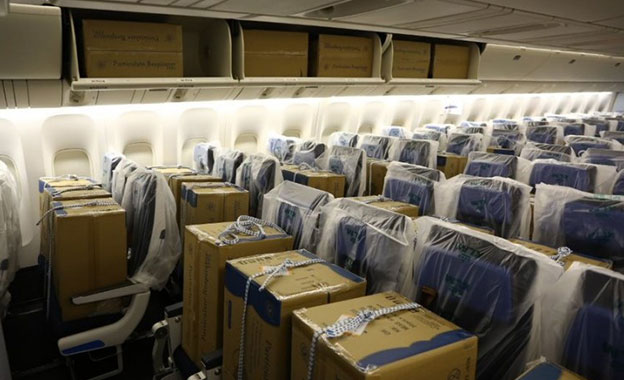 Today, KLM’s first passenger carrier departed, carrying cargo not only in its belly, but on the passenger seats and in the baggage bins of the aircraft cabin. KLM operated a B777-300 flight from Shanghai to Amsterdam, for the first time introducing the new cargo carrying concept. The load consisted mainly of urgent medical supplies, including hundreds of thousands of face masks and protective gowns to be used in combatting coronavirus. The new cargo carrying concept makes additional space available to ship personal protective equipment (PPE) such as this.

Around 500 packages of equipment can be carried in the cabin on each flight. If the trial proves successful, Beijing and Hong Kong will join Shanghai on the list of destinations for this new service. KLM will be deploying three Boeing 777s to operate Cargo-in-Cabin flights. The B747-400 combi flights currently re-entering service on these routes will soon be reconfigured to be similarly deployed. The packages will be bound to the passenger seats and stowed in the baggage bins.

Your company earns blue credits on flights operated by AIR FRANCE, KLM and partner airlines. Blue credits can be redeemed for free tickets for your company. This delivers instant savings on your travel budget.

Enrol today - it's easy and free

Find out more about our benefits!

Our response to COVID-19

Due to the COVID-19 situation, most of the airlines that are bluebiz partners, had to cancel the majority of their flights.

KLM looks ahead to tech and travel trends for 2020

KLM looks to the future of travel: from booking with the aid of voice technology to sustainable alternatives such as rail services.

KLM has opened a new service channel for the Japanese market. Via the social media platform LINE, media agents will offer 24-hour service.

To send you to the right destination we're going to need a bit of extra information. Please select the right settings.