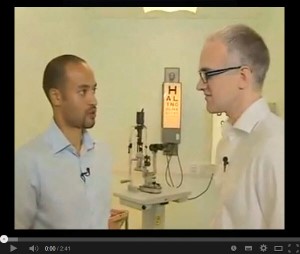 39 Million people in the world are blind. Nine out of ten visually impaired people live in low-income countries, and 80 per cent of their blindness is avoidable. Yet those most in need of health care in Africa are the least likely to access it. In Kenya, The Portable Eye Examination Kit – Peek – delivers a comprehensive eye test in any given location, using a smartphone. How research translates into a much-needed healthcare product for Africa.

“What started as a research project, grew into an innovation far bigger than the study’s original scope.” Amidst his many patients’ visits, Kenya-based ophthalmologist and eye-health research fellow Dr Andrew Bastawrous articulates the Peek story: “For a study on blindness, we tested thousands of Kenyan study participants in 100 locations, with a team of 15 people, two vehicles and 150,000 pounds sterling worth of equipment. While doing so, we developed an app that performs an eye test equivalent to the conventional tests, and are applying both methods side by side to verify the accuracy of the app.”

The portable eye examination kit, of which the first component will be released in March 2014, consists of a smartphone, an app and a one- to two-millimetre, 3D-printed clip-on adapter. The kit is as portable as any smartphone, and is taken along by community healthcare workers in Africa– not eye care specialists – to the hardest of hard-to-reach locations. On site, the examiner is asked to enter a patient’s personal details and locate his or her residence on Google Maps. Showing a squared letter ‘E’, the patient is asked to indicate the direction of the fingers of the ‘E’, as it varies in size and orientation. The practitioner swipes the screen according to the response of the patient. After the test, as well as a numerical value, a live video feed with corresponding blur levels resembles the patient’s eye sight.

“Having tested 2000 people to date, our data suggest the app is accurate, much faster, more portable, and more acceptable to people who have never been medically treated and feel threatened by large-size electronic equipment”, Andrew says. “80 per cent of blindness is either preventable or curable, and with a single 40-dollar operation that lasts for 10 minutes, those blind from cataract (the most common cause of blindness) can go home within one or two days. Blindness is a disease of poverty – Peek is a way to identify those most in need of treatment.”

And what does the future hold for Peek for improvements in health care in Africa? Andrew: “Kenya is an ideal starting point. Partly because my department at the London School of Hygiene and Tropical Medicine already had existing partnerships in place, partly because Kenya houses a strong infrastructure for mobile telecommunication – one third of the country’s GDP is transferred through M-Pesa. We completed 90 per cent of our study in Kenya, and another three are due to start soon in Botswana, Tanzania and India. But in order for Peek to be disseminated worldwide, we will first need to finish our study and support the app with concrete evidence.”

Raising chefs from the slums of Nairobi | Biz for Biz