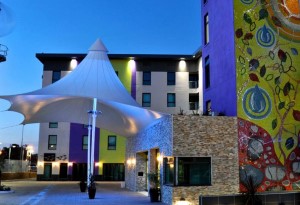 Hotel Verde, close to Cape Town International Airport, is the world’s greenest hotel. It is the only hotel on the planet to receive a double-platinum certificate from a US authority for its sustainability efforts.

The 145-room hotel was built with environmentally sustainable materials. Hotel Verde also has three 17-meter tall wind turbines that produce renewable energy, saves thousands of kilowatts of electricity a year and 6,000 litres of water daily. Solar panels cover its north façade and roof. Furthermore, the building uses air pumped from 100 boreholes, each 65m deep. This ventilation system controls heating and cooling of the entire complex. Certain sections of the building can be switched off when not in use.

Kinshasa has a brand new 5 stars hotel. The beautiful interior of the new Pullman Kinshasa Grand Hotel has an italian design style.

Airbnb has launched its platform in South Africa. It is the largest market for the online marketplace for travellers in Africa with 9,400 homes listed.