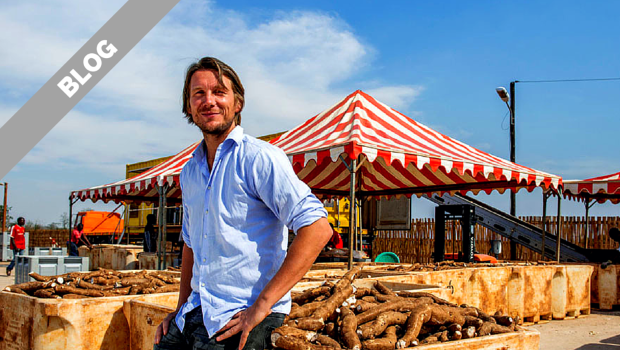 Dutch company DADTCO has developed a mobile factory providing a solution to the problem of cassava roots perishing during transport over long distances in Africa. Connecting small-scale cassava farmers to the industry might transform cassava into a commercial crop.

Although cassava is one of the most widely grown crops in Sub-Saharan Africa it’s hardly been grown commercially due to the fact that the roots already start to spoil 48 hours after harvesting. The Dutch Agricultural Development and Trading Company (DADTCO), however, developed a mobile cassava root processing plant housed in a modified 13-meter container. This so-called AMPU (Autonomous Mobile Processing Unit), which can be moved to the different areas where cassava is produced, transforms the fresh cassava roots into a cassava cake that can be stored for up to six months. SAB Miller, the world's second largest brewery, now uses this locally produced cake to brew ‘Impala’ beer in Mozambique and ‘Eagle’ beer in Ghana.

Gaining the trust of small-scale farmers

Gaining the trust of small-scale farmers on the ground and transforming them into commercial farmers appears to be a challenge though. ‘When we move our AMPU to the next location, some of our farmers fear we will never come back’, Hubert van Melick, director of DADTCO Mozambique says. He understands where the distrust is coming from: ‘Many companies and NGO’s came here making beautiful promises and then just left again.’ DADTCO tries to gain their trust by paying them in cash and being as transparent as possible.

Crop diseases are additional challenges for the farmers like Cassava Brown Streak Disease. Due to the absence of a commercial market disease-free cassava cuttings weren’t readily available and producing and handing them out to the farmers takes up time and money. Farmers who didn’t receive improved cuttings yet, still hesitate to start growing cassava on a bigger scale.

The 54-year-old Abilio Nahura, who did receive disease-free cuttings two years ago, is very happy though. ‘Thanks to the improved cuttings, my yield has increased from two to thirty tons per hectare’, the farmer says with a big smile while pulling one of his cassava plants from the ground, demonstrating the much larger roots. The extra money bought him a corrugated roof for his house and because of the guaranteed purchase by DADTCO, he is now going to plant more cassava and is even considering hiring personnel.

In Nigeria, DADTCO transforms the cake into high quality cassava flour. This can replace up to 10% of wheat flour in bread, can be used as a substitute for wheat flour in biscuits and is regarded as a good raw material to be used in gluten-free products, while cassava starch can be used in seasoning cubes, sauces and soups.

As wheat hardly grows in Africa due to the climate, the continent can become less dependent on import when changing over to cassava. However, Nigeria based importers from the USA, India and Greece try to prevent this by all means, tells Suzanne Vlakveld, chain manager of DADTCO. 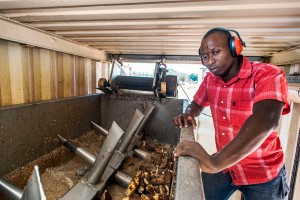 Fortunately Nigeria’s government is starting to see the benefits for the biggest cassava country in Africa of no longer importing 3.5 billion euros of wheat per year but moving over to cassava flour as much as possible. So the government has mandated that flour must contain at least ten percent of cassava flour, opening a new market for DADTCO. The company now runs six AMPU’s that buy cassava from around 12,000 farmers and supply to two cassava flour factories, run by DADTCO as well.

DADTCO is also investigating how cassava cake can be processed into cassava-based syrups and sorbitol, commonly used in toothpaste, sweeteners and cosmetics and has plans to expand to Angola, Cameroon, Rwanda and Zambia. Vlakveld: ‘We believe cassava can be the crop to unleash Africa’s agricultural potential.’

Mkulima Young is an initiative that supports young farmers looking for new initiatives. Farming is becoming ‘hip and happening’ in Africa.