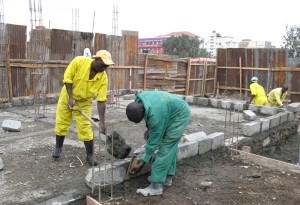 The Kenyan economy grew by 4.9 per cent in the first quarter of the year, slightly higher than the 4.7 per cent recorded in the same quarter last year. Thanks to a good performance of the country’s construction, trade and transport sectors, the economy did not experience a slowdown. Still, the 4.9 per cent growth rate was slowest in the past four quarters.

The growth was mainly supported by strong expansion of construction, finance and insurance, information and communication, electricity and water supply, wholesale and retail trade, as well as transport and storage.

The good news more than compensates the bad news of poor performance in the manufacturing and tourism sectors, The Kenya National Bureau of Statistics (KNBS) states in a report on Business Daily Africa. The manufacturing sector activity slowed down to 3.5 per cent compared to 6.4 per cent in a similar period last year.

Never before has the world invested more money in Africa than in 2014. Capital investment into Africa surged to US$128 billion (€115 billion).

Ghana and Kenya are investigating ways to deepen trade relations between the countries as well promote intra-African trade.