There is so much more to African art these days than ivory masks and wooden sculptures. More and more contemporary artists from Africa are finding their way to international galleries and biennales. Congolese artist Jean Katambayi Mukendi is one of them.

A dark shed in a backyard in the Congolese mining city of Lubumbashi is not exactly the place you would expect to find contemporary art. Nevertheless, in this little workshop Jean Katambayi Mukendi spends days and nights to create provocative art pieces, made of cardboard, metal and glass often also integrating algorithms and electrical equipment such as multi meters and little light bulbs. His work shows influences from daily life using what he learned from an electrical engineering training. 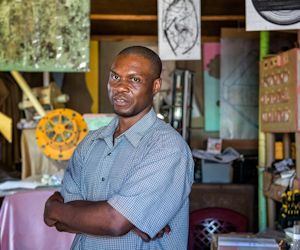 “The Congolese society inspires me the most”, the talkative artist says. For example, he recently produced ‘Afro lamps’ – a series of paper drawings of various characteristic light bulbs made with ballpoint, felt-tipped pen and a homemade compass to draw circles. By creating this piece of art, he winks at the fate of millions of his fellow countrymen facing daily power cuts.“I keep wondering why we never had power problems during colonial times and now we actually feel lucky if we have electricity three days a week.”

The Congolese artist recently returned from the Belgium city of Antwerp where he collaborated with Flemish art gallery trampoline for three months. He also exhibited in France and Austria several times and in 2010 he won the "Prix de la Découverte at the Dak’Art biennale in Senegal. 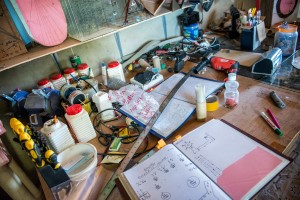 ‘Africa was an untouched Eden’

Besides Mukendi, a rapidly growing number of African artists manage to get a foothold in international galleries and biennials. "African contemporary art is really at a turning point," Pierre-Christophe Gam, an art director of Cameroonian-descent based in London, said to The Economist. "In terms of art, Africa was an untouched Eden. Until now."

Due to the lack of institutional and financial backing in the past, the continent's art scene had struggled for decades. But the Internet and economic growth have enabled African artists to promote their work internationally. Leading museums such as the Tate Modern in London and the Brooklyn Museum of Art in New York nowadays have collections of contemporary art from the continent. And wealthy art lovers in South Africa, Nigeria and Ivory Coast have been flexing their financial muscles, increasingly supporting the creation of independent galleries and museums. "This is not only about the world discovering African art, it’s about Africa discovering art as well," remarked Marie-Cécile Zinsou, president of the Zinsou Foundation in Benin, in an interview with RFI English.

Prices have more than doubled

According to the first Africa Art Market Report, prices of African art have more than doubled in the past four years. British auction house Bonhams even has seen average lot prices increase 5-fold, to about $50,000, since it started specializing in contemporary African art in 2007, CNN reports, and ArtHouse Contemporary Limited, an auction house based in Lagos, Nigeria, notes that pieces bought at their very first auction, back in 2008, have increased up to 10-fold in value today. The continent’s art market remains a ‘niche’ though. The 2014 modern and contemporary African art market was estimated at $31.2m, completely overshadowed by the global market, which that year reached a high of $68.2bn, reports BDlive.

Despite the growing international attention, many African artists still struggle to make a living. “Lubumbashi hardly has any options to exhibit my art, the Congolese government doesn’t invest in the art sector at all and most of the ordinary people in Congo are not interested in art at all”, Mukendi states. Although the largest country in Sub-Saharan Africa is home to the biggest mineral reserves in the world, the vast majority of people live on less than a dollar a day. “I understand that their first priority is to survive and find food but art is also important. Through art people are triggered to ask questions and look differently at the society they live in.” 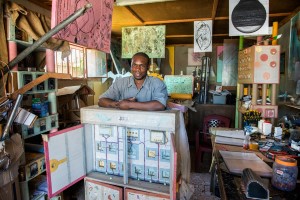 According to Mukendi, in Congo artists aren’t as free to exhibit, as they would like to be. In his artwork ‘Sol sous Sol’, made of glass plates, he incorporated for example an image of the Berlin Conference when European colonial powers formalized the distribution of Africa in 1885, and he’s also indirectly criticizing the dividing of Congolese provinces, currently happening in his country.

“Because I criticize current Congolese politics, I’m kind of afraid to exhibit this piece in my home country.”

“The power is back”, Mukendi suddenly shouts, while walking with a big smile to another art piece where he pushes a button and lights start to flash. It’s a scale model of the copper mine in Lubumbashi where his parents worked their whole lives and which is owned by state-company Gécamines. Mukendi sarcastically named the piece 'Gécaruines'.

Despite his own struggles the artist feels positive about the future. "Contemporary art is finally on the rise in Africa. Hopefully African governments and people will also start to acknowledge its importance.” 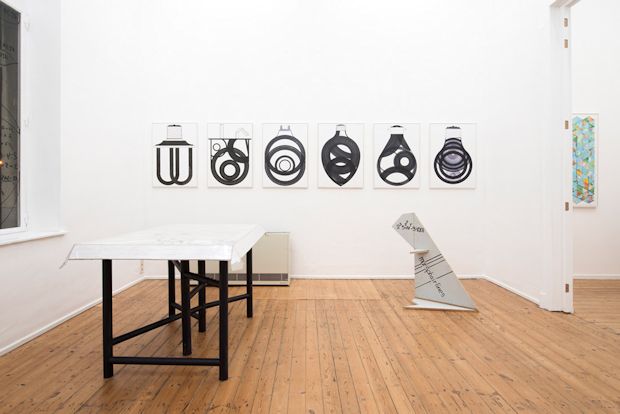 Trendy food markets lure people from the suburbs to downtown Johannesburg and turn the once dangerous area into a multicultural, pleasant neighborhood.

FairTrade vanilla grown on the slopes of western Uganda