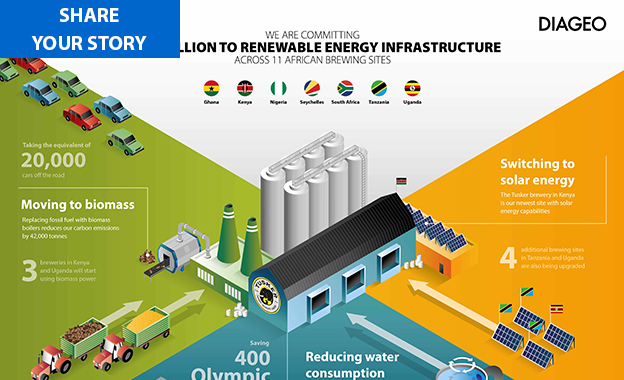 While countries all over the world aim to meet the requirements of the Paris Climate Agreement, businesses in Africa are contributing in their way help stop climate change. Global drinks giant Diageo recently grabbed the international spotlights by launching a $218 million investment plan in ‘green breweries’ in 10 African countries.

Diageo, the owner of iconic brands, including Guinness and Johnny Walker and the well-known African beer brand Tusker, made headlines all over Africa. The company will overhaul the electricity mix at its African brewing sites across the continent. The $218 million is big money. The spending consists of an initial $60 million upfront investment in equipment and installation with $158 million earmarked for long-term maintenance and operations costs.

The company is investing in reducing the enterprise’s carbon footprint at several brewing sites on the continent, in several ways such as solar energy, biomass power and water recovery. The installation of biomass boilers to help cut Diageo’s carbon emissions by 42,000 tonnes a year while new water recovery equipment is projected to save over two billion cubic litres annually.

At three African breweries in Kenya and Uganda, Diageo is switching to renewable energy.

New biomass boilers will replace heavy fuel oil using sustainable fuel alternatives such as wood chip and rice husks to create steam power for the breweries. The boilers will help reduce carbon emissions by 42,000 tonnes (the equivalent of taking tens of thousands of cars off the road).

At five sites in Africa, including in Kenya, Uganda and Nigeria, the company launches new water recovery, purification and reuse facilities saving over two billion cubic litres of water a year.

A large part of the total investment goes into solar power. Solar power installations are to provide renewable electricity at 12 breweries across six countries. These solar panels will produce up to 20% of each brewery’s electricity demand. It will cover 11 sites in seven countries including Kenya, Uganda, Tanzania, South Africa, Seychelles, Nigeria and Ghana.

In Kenya, Diageo’s brand new brewery Kisumu has already had solar power and water treatment facilities installed to ensure its operations have minimal impact from their start. “With 100% renewables and cutting-edge water efficiency, we believe Tusker will be the most environmentally sustainable brewery in Sub-Saharan Africa’”, the company proudly announced.

According to Ivan Menezes, both the environment and the company benefit from the investment program. “We’ve set ourselves ambitious environmental targets, aligned with the United Nations Global Sustainable Development Goals, and our efforts to deliver on these by 2020 continues at pace. Progress has included a 45% reduction in our carbon emissions and a 44% reduction in our water consumption over the past decade.”

Apart from the battle to beat climate change, the program promises to produce multiple winners. For example, the program has an added impact on jobs as Diageo’s breweries will depend on local suppliers for biomass fuel for its new boilers. The program is also beneficial to Diageo’s local brand reputation and image. Investing in a good cause like this may prove to be an advantage in the battle for Africa’s $13 billion beer market, which is the fastest-growing globally.

Ethiopia will move its coffee fields uphill, to cooler regions, as a direct result of rising temperatures and worsening drought linked to climate change.