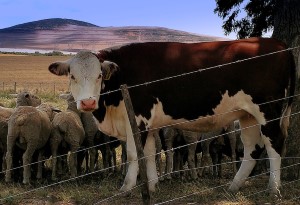 South Africa is hit by the worst drought since 1992, with the agricultural sector being hardest hit. As a result of the drought, red meat sales are likely to plunge in the coming months as consumers resist price increases in beef.

Business Day Live reports about the worries of the Red Meat Producers Organisation in the Western Cape. Farmers are having a hard time battling to harvest crops or feed livestock. Livestock feed prices have gone up, says Agri Western Cape. Feedlots are under more pressure because of the shortage of maize products, which will only be available at very high prices.

The current poor exchange rate and shortage of lamb will also affect the potential import of mutton to make up for the shortages in this sector. All these factors point to increased consumer and producer prices, especially in the second half of the year due to shortages on the supply side.

Image by By Lollie-Pop from Cape Town, South Africa, via Wikimedia Commons