They are called the Black Mamba’s and patrol the bush on a daily basis. A team of 26 female rangers has joined the fight against rhino poachers to protect the critically endangered species. "Women are crucial in saving the rhino."

Four young women in green camouflage and black combat boots are stepping through the thick bushes in Balule Reserve, bordering the famous Kruger National Park in South Africa. They are scanning the ground, looking for traps and other traces of poachers. "Many people think this is a man's job, but we can do this just as well," says the tall and slender Cute Mhlongo. The 27-year-old Black Mamba with short frizzy hair stops at two narrow trees pointing out a metal loop strung across. "A poacher’s snare," she explains while removing it with some help from a colleague. It takes more than a military approach

The so-called Black Mamba Anti Poaching Unit was founded by Craig Spencer in 2013. This head ranger of the Balule National Reserve started to realize that it would take more than a military approach to solve the ongoing poaching problem. "Annually hundreds of poachers get shot in the Kruger Park," the slender South African says. "This is creating a war between people inside and outside the reserve. A war that we might not win," Spencer says who believes that surrounding communities need to be involved to come up with a more sustainable solution.

According to him, women will play a crucial role here. "They already have the responsibility to take care of and protect their children and are more likely to also want to protect animals.”

The 26 Black Mambas stay at basic camps and go out daily for foot patrols in small teams to cover the 50,000 hectares reserve that has open borders with the 2.8 million hectare Kruger National Park. When they find traces of poachers, they warn an armed team that will back them up. And their work seems to be paying off. The women caught six poachers, closed down nineteen poaching camps and removed more than a thousand snares in the past two years. 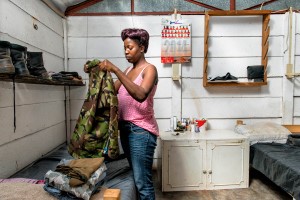 Thanks to the Black Mambas, bush meat poaching came down by 78 percent and the number of poached rhinos decreased by 67 percent. This is in contradiction with the high increase of the total number of poached rhinos in South Africa in recent years - from thirteen in 2007 to 1175 last year - due to an increasing demand from primarily Vietnam and China where people wrongly believe that powders made from rhino horn can cure a variety of diseases, including cancer.

The Black Mambas are also tasked with the duty to change the mentality of their fellow South Africans. The women do this by educating children at primary schools in nearby villages on nature conservation and the fight against poaching. Like at the St. Patrick's primary school in Namakgale village, where dozens of pupils breathlessly listen to Lewyn Maefala - the Black Mamba's Environmental Education Officer - who teaches the children about water pollution and how this affects animal lives. "Nature conservation still seems to be more of a concern to white South Africans while we as black South Africans should relate to the issue just as much," the 23-year-old conservationist with short dreads says.

Reaching poachers through the pupils

When two Black Mambas in uniform appear in front of the classroom, the eyes of the children light up. "What do you do when you encounter a lion," a student asks and one of the Mamba's replies that you have to continue to look the animal in the eye while slowly walking backwards. The female rangers also explain what they do to fight the poaching of rhinos. "Virtually every student at this school has a father or uncle who is a poacher," says Maefala. "We hope that the message to stay away from Balule will reach them through these students." 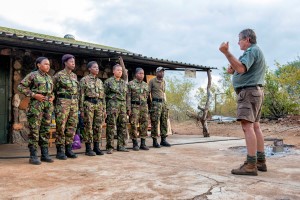 The Black Mambas also try to teach these children at an early age how important it is to preserve nature. "This new generation is receptive to this, admires us, would like a job like ours and this may encourage them to start to take care of nature as well and most importantly to not become a poacher," Maefala says after class.

Rhino isn’t a dinosaur yet

The Mambas work for three weeks in a row after which they go back home for ten days. Their mothers often take care of their young children while away from home. "Of course we miss our children," 27-year-old Belinda Mzimba says. "But if we continue like this, the rhino will be an animal that we only know from books just like the dinosaur. I hope that, thanks to my work, my 5-year-old daughter still will be able to see rhinos in the wild later on. 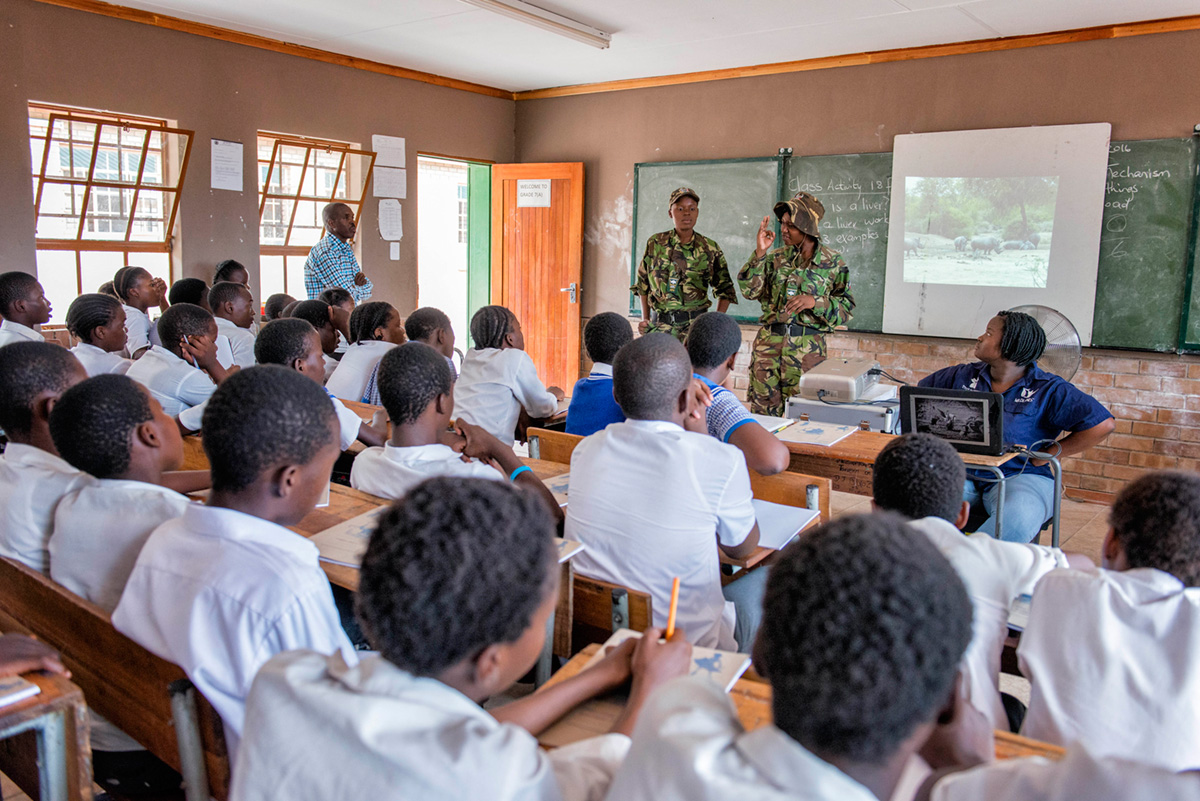 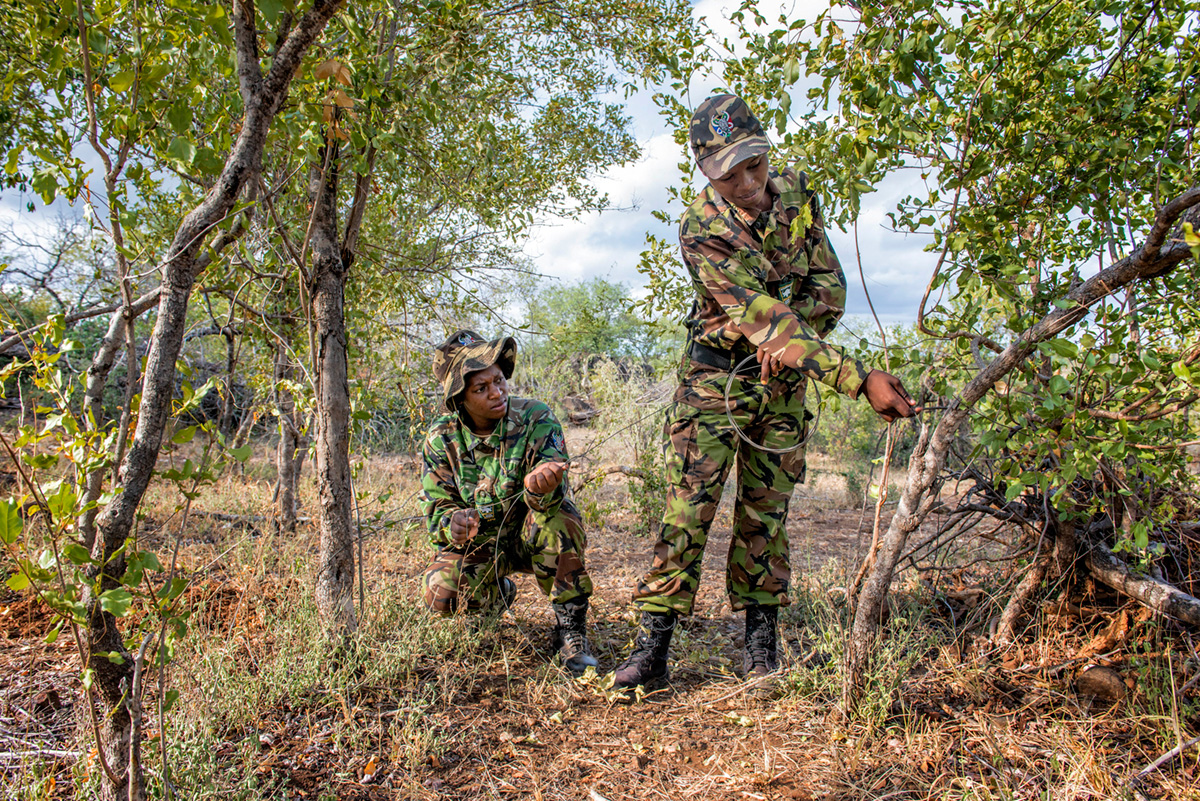 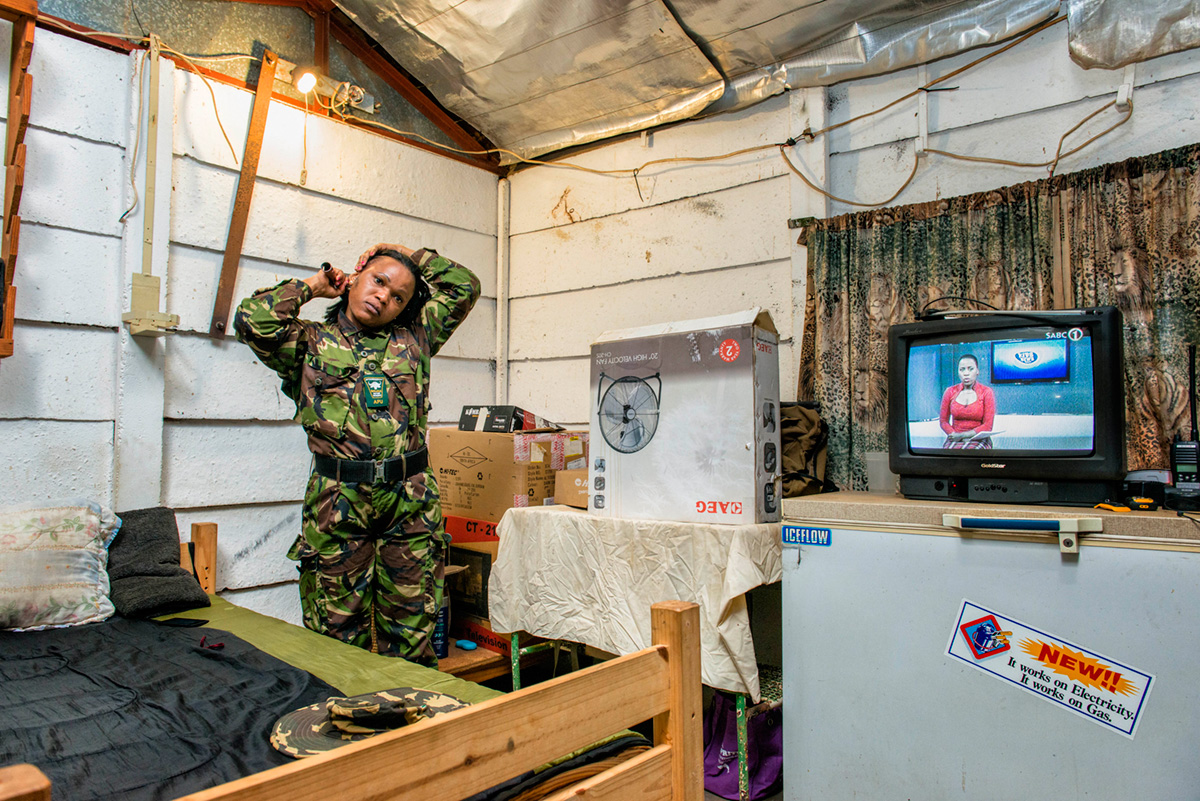 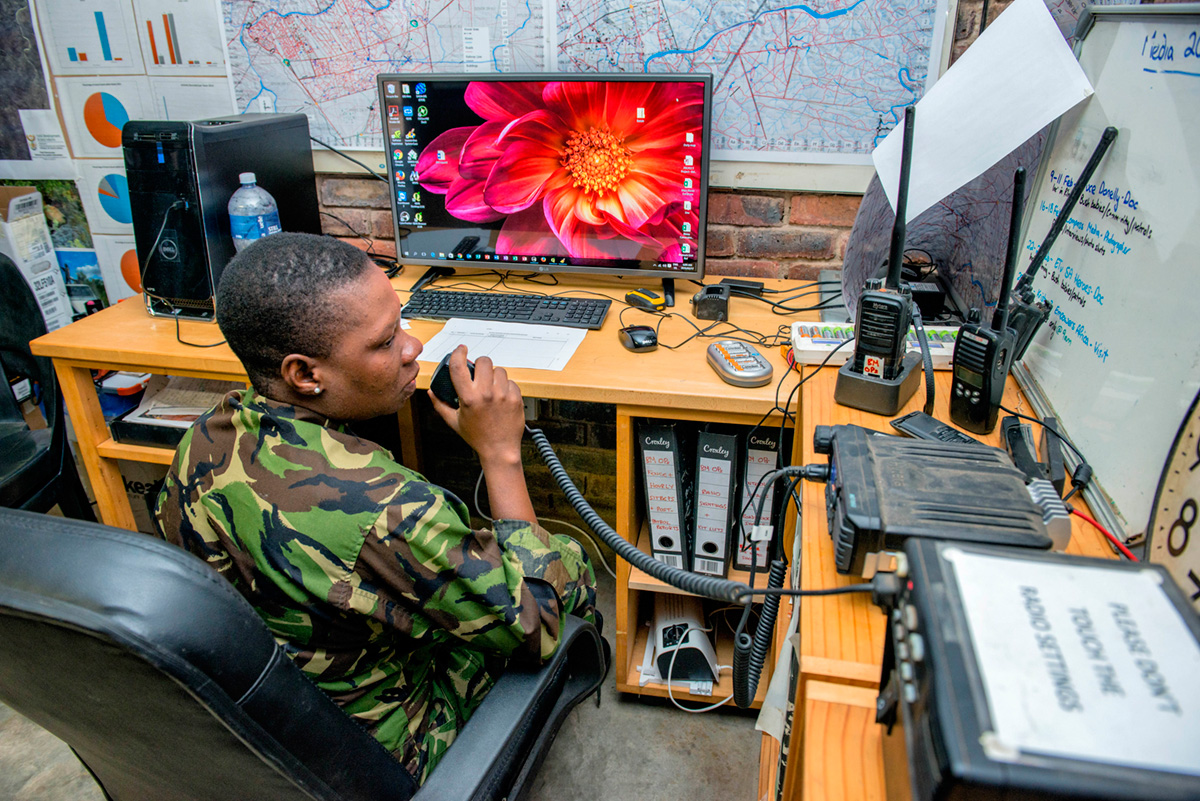 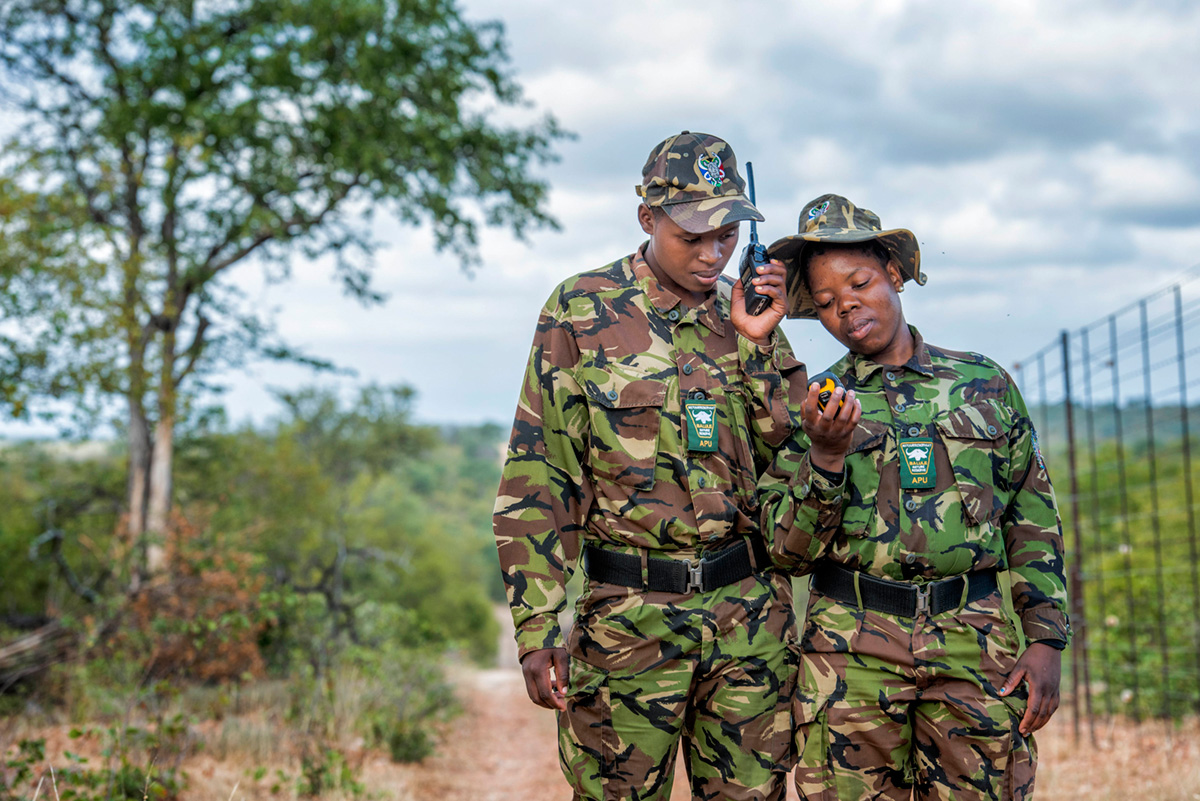 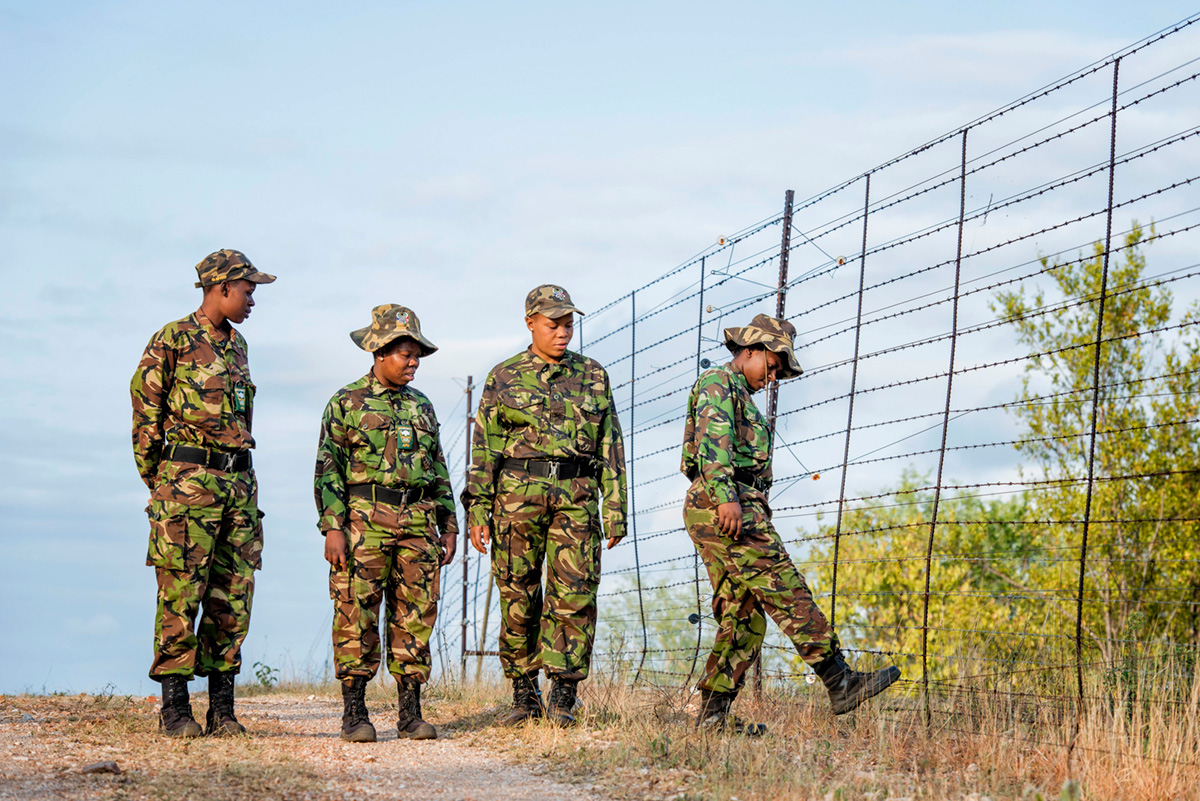 In South Africa you can enjoy a scientific lecture in a nightclub while drinking a cocktail during the Science & Cocktails event.