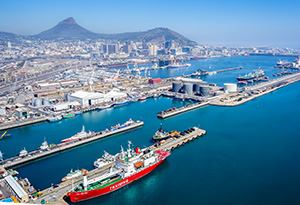 After years of slow growth, there may be light at the end of the tunnel for the struggling South African economy. Moody’s and IMF are moderately positive about one of Africa’s biggest economies.

According to a Daily Mail report, the IMF projects 0.6 percent economic growth in South Africa this year and a ‘muted recovery’ beginning next year. Jeff Radebe, the planning minister and SA government spokesman, has said that the economy "is on the right track”. “Our turning point is near”, Radebe insisted.

An IMF spokesperson has said that South Africa had taken "appropriate steps" to counter rising government debt and inflation, and noted progress in curbing electricity power cuts, a drag on productivity. More good news: Moody's did not downgrade South Africa's credit rating as some South Africans had feared.

Image by SkyPixels, via Wikimedia Commons

The miraculous recovery of Zambia's Kwacha

Zambia’s local currency, the Kwacha, has improved its performance tremendously in the past months, advancing 19.9 per cent against the dollar in 2016.