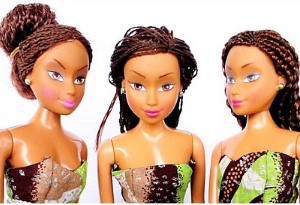 Barbie may still be hugely popular among little girls all over the planet, but Africa has its own, home-bred alternative. A Nigerian businessman has launched local dolls – Queens of Africa – that African girls can relate to better and that are a big hit.

Afritorial.com reports that in 2007, Taofick Okoya started creating dolls, after he had failed to find black dolls in local shops for his niece. The dolls cost just over €6; they come with traditional outfits and accessories, based on his country’s biggest tribes. The dolls aim to promote strong feminine ideals, like love, peace and endurance.

Okoya sells 9,000 units of The Queens of Africa a month – that is about 15 per cent of the country’s toy market. The brand is now outselling Barbie in Nigerian stores. Customers from as far as America, Brazil and Europe are buying the dolls online.

With a projected development cost of €276 million, The Aba Mega Mall in Aba, Nigeria is expected to become the largest shopping mall in Sub-Sahara Africa.

Nigeria accounts for almost one third of Africa’s internet access