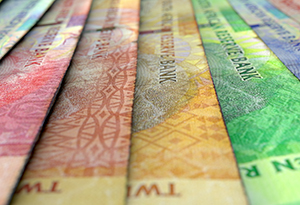 After a re-calculation based on IMF data, South Africa has overtaken Nigeria as the largest economy of Africa. As the rand has strengthened against the dollar, South Africa is now back on top on the continent.

In 2013, Nigeria’s GDP grew from about $270 billion to $510 billion in 2013, an increase that was largely based on new calculations that took into account new sectors of the economy such as telecommunications, movies and retail.

A recent re-calculation based on IMF data, taking into account the current exchange rates, puts South Africa back on top. Nigeria’s currency has fallen sharply since the currency lost over a third of its value. In the meantime, South African Rand has gained more than 16 per cent against the Dollar since the start of the year.

Despite the news about the size of the economies, both Nigeria and South Africa face economic difficulties. VenturesAfrica reports that South Africa recorded negative growth of -1.2 percent in the first quarter of the year and Nigeria’s economy similarly shrank by 0.36 percent. In Nigeria, the inflation is 16.5 percent. In South Africa, unemployment has soared to 26.7 percent.