Since ancient Greece, doctors have used their nose to examine ill people’s breath and diagnose patients. Today, a team of dedicated scientists and entrepreneurs is developing an electronic, more intelligent version of that centuries-old doctor’s nose: the eNose. In Africa, the device is deemed to accelerate diagnosis of tuberculosis.

Funded by several microcredits and a successful crowd funding project, the eNose currently awaits completion of academic studies before it can hit African healthcare markets. It is expected that the eNose can be used to diagnose tuberculosis in 2016.

According to a recent study by the World Health Organisation, there are almost half a million more cases of tuberculosis than was reported to date. The organisation’s Global Tuberculosis Report 2014 shows that 9 million people developed TB in 2013, and 1.5 million died who had contracted the disease. Africa, with 280 cases per 100,000, showed the highest incidence rate. Since 2013, The eNose Company, based in Zutphen, The Netherlands, explores medical applications of artificial olfaction – or ‘artificial smelling’ – which can diagnose tuberculosis and other diseases much faster than conventional diagnostics.

“To date”, Jan Willem Gerritsen, Chief Technology Officer, says, “two methods are at hand to detect tuberculosis. Either a sputum sample of a patient is cultivated to determine whether it contains the bacteria responsible for TB, or the presence of those bacteria is revealed in sputum using a microscope test. The first method takes weeks to deliver results – while the disease is highly infectious, and in case of contraction requires rapid intervention to prevent the bacteria from spreading further – and the second has a low accuracy rate. The eNose should provide for quick test results and a relatively high accuracy rate.”

The eNose, a physical device the size of a lunchbox, is able to identify a particular pattern in human breath. For a duration of five minutes a patient breaths through a mouthpiece and has their breath screened by the eNose. Via the internet, data collected from the patient is sent to a server in Zutphen, and compared to existing information. The analysis is returned, and within fifteen minutes the person performing the test has the results displayed on a smartphone. Using the device is easy; the health worker operating the eNose does not require any particular training. 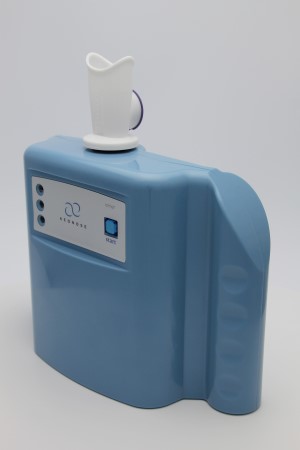 Jan Willem: “Like a newborn child that does not know the difference between the smell of an orange and an apple, the eNose must be trained to recognise a disease. By virtue of repetition, we condition the nose to differentiate a healthy from an ill person. Because the tuberculosis genome differs across the world, we perform studies in various locations. In cooperation with Harvard university, a study is carried out among children in Kenya. In South Africa, a phase 3 clinical trial is executed by professor Keertan Dheda at Cape Town university. Other studies still are performed in Indonesia and Paraguay.”

“What is unique about the eNose”, says Jan Willem, “is that its algorithm can be copied and pasted from one module to the next. We build the eNose using standard electronic components, which gives us a competitive advantage. A single eNose used for tuberculosis diagnostics will cost between €500 and €1000. Once in use, for every single test we charge a maximum of US$ 10.”

Peek is the newest innovation in health care in Africa! This mobile app, going to expand to other countries, will improve eye care for Kenya