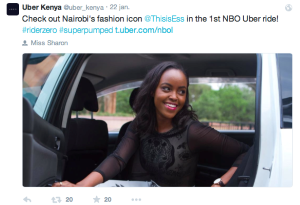 Uber has launched its taxi service in Nairobi, Kenya, after having touched down first in Johannesburg, South Africa and then Lagos, Nigeria. The expansion of the popular taxi service in Africa is taking shape.

Uber is currently operating in over 250 cities across the globe, 190 more than it had in 2013. The expansion of Uber in Africa is facing difficulties due to unwelcoming laws of certain traditional taxi industries. During upsets in Cape Town over 30 cars were impounded for not abiding by the city’s taxi laws. The Kenyan taxi environment, as Ventureburn.com describes it, “has a unique set of dynamics which will make the roll-out (and traction) a very interesting one to witness going forward.” Nairobi taxis rely on zone pricing where traveling within a specific zone has its own fixed price. Furthermore, the intense traffic within the city could also complicate Uber’s pricing formula. Then there is the city’s unique payment demographics.

Whereas Uber generally relies on automatic credit card payments, Kenyan taxi start-ups such as Maramoja and EasyTaxi, have all adapted to include the acceptance of cash or M-Pesa, which is already used by 19 million Kenyans. Uber is said to be exploring the possibility of integrating its app with the hugely popular M-Pesa mobile payment service.

Blogger Adam Mosley, pastor and writer in Nakuru, Kenya compiled a list of most taken pictures in Africa. Isn’t Africa a wonderful place to take pictures?

McDonald’s is ready for Kenya

McDonald’s has invited investors to put in applications for a Kenya franchise. The international fast-food chain has plans to open shops in Nairobi.