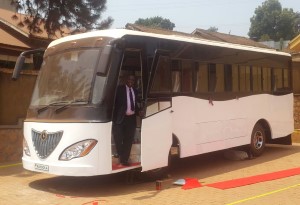 Uganda car manufacturer Kiira Motors has claimed a first in Africa. Its Kayoola bus was the first African solar-powered bus to have appeared in public. The bus had a test-drive before an audience in a stadium in Kampala. Kiira Motors now hopes to attract partners to help mass produce the bus for the African market.

The Kayoola electric bus has a range of 80 kilometres (50 miles); one of its two batteries can be charged by solar panels on the roof. The 35-seat bus is intended for urban areas rather than inter-city use because of the restrictions on how far it can travel. If it is mass produced, each bus would cost up to € 51,000.

According to a BBC report, The Kayoola project grew out of a project at Uganda's Makerere University. In the next phase, backing from international companies is essential for the mass production to take off. Company management hopes that production and assembly of the bus in Uganda will generate employment; according to estimates, more than 7,000 people could be directly and indirectly employed in the making of the Kayoola by 2018.

Fresh cuttings, depending on reliable air connection to the world

Nkumba parish-Uganda is one of the best places in Africa to produce plant & flower cuttings. Factors like the local people make the success of Wagagai Ltd.

Its offer of high-level advice, practical implementation and maintenance of grid and solar power solutions makes Konserve a strong partner in Uganda.