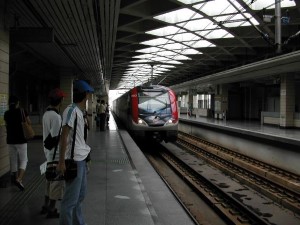 China’s air pollution forces cities to look into light rail transport. A total if 4,000km in light rail track is planned across the country (forty times the size of the current network), half of it is to be completed in 2020.

According to a report by Xinhua News Agency, light rail is meant to help solve severe traffic jams during rush hour in the cities of Guangzhou and Shenzhen. Guangzhou already tried to reduce vehicle sales by limiting license plate issuances, but with little effect.

In Shenzhen, construction companies have started work on three lines with about 51km of track. The first light rail trains will start running end of 2014 in the central Longhua New District, which has a growing population and a high concentration of homes and factories. Guangzhou and the nearby cities of Foshan and Zhuhai have also embarked on light rail projects. Elsewhere in China, Shenyang and Dalian in Liaoning Province, Shanghai, and other cities provide light rail service.

China’s CNR Corp. and CSR Corp. will build the stock for the planned light rail lines, based on a licensing agreement with European giant Siemens.

Good news about China’s economy! It expanded last year with 7.7 percent and even the job market is growin with 31.1 million new jobs

The IT company Lenovo takes over Motorola for greater access in the mobile phones market.