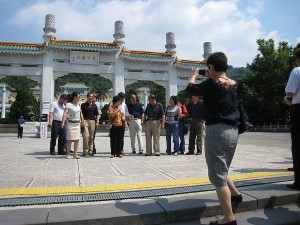 A new government campaign aims to combat uncivilized behaviour by Chinese tourists. The Chinese government hopes that the new tourism campaign will teach Chinese that travel abroad some manners.

Several well-known Chinese figures such as sports commentator Wei Yi Dong and singer Liu Gang were present at the campaign launch ceremony at Beijing's Summer Palace to support the cause. Mashable reports that during the campaign year, the tourism board will be planning activities to educate Chinese tourists about green tourism, keeping the environment clean and dining etiquette.

Image by Jiang (Own work), via Wikimedia Commons

KLM welcomes its newest Boeing 777-300 featuring a new interior in its World Business Class & Economy Class. The Boeing is decorated in the new livery.