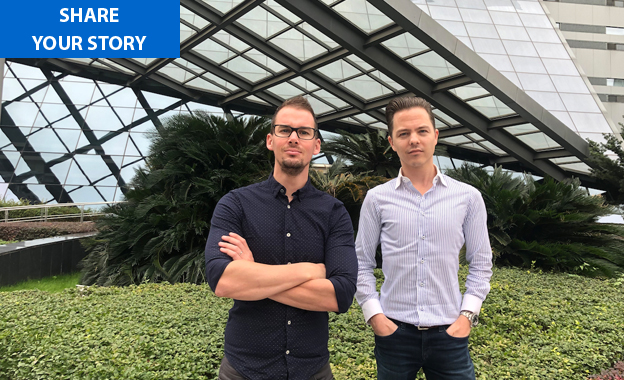 Blockchain is a lot more than just bitcoins. In fact, it is a very promising technology that can bring forward complex but uber-clever solutions. To support China-western cooperation for the development of such solutions, young and ambitious entrepreneurs founded China Blockchain Partners (CBP). From Chengdu, they bring together pioneers, enterprises and funding from China and the west.

Blockchain is maturing fast, coming from a focus on speculative cryptocurrency to solutions that have real business potential as well as real business cases. In a literal sense, a blockchain is a growing list of records, called blocks, which are linked using cryptography. It is an open, distributed ledger that can record transactions between two parties efficiently and in a verifiable way. The technology is so powerful and potentially has so many valuable applications, that thousands of startups all over the world are working round-the-clock to develop killer-solutions. A large part of them operates in China.

“It is very simple, China says no to cryptocurrencies, ICOs and speculation, but yes to blockchain technology”, say Robert van Aert (30) and Dries van de Wal (34), who (together with three partners based in The Netherlands and Belgium) founded CBP, a young consultancy firm in Chengdu – staff: 10 – that specializes in the blockchain industry. Robert and Dries explain that there is a thriving blockchain community in China. Some cities, such as Hangzhou, have launched blockchain parks, which are dedicated business parks, exclusively for blockchain business. Dries: “Chinese startups are looking for support and business partners in the west. At the same time, international enterprises want to tap into – and be part of – China’s pioneering development skills.”

“We identify interesting projects and bring together the pioneers and the enterprises. We hook up interesting international blockchain projects to Chinese venture capitalists. This is not just about bringing in a bag of money, but about finding ‘smart money’. We connect European projects with value-adding investors that also play a crucial role to tap into the right network developing the project’s business in China. In the process we also guide them on how to make their pitch attractive to Chinese investors”.

What can blockchain do for business? Dries van de Wal (34): “The possibilities are endless. Logistics and traceability of products is a clear focus area. Bringing together all documents needed to get a product from China to the other end of the world.”

Blockchain potentially allows users to follow and control the life of a product from the first nuts and bolts in China, via various production and quality assurance stages to shipping and delivery in the west. Or the other way around. The key word is trust: the blockchain brings trust, as it brings visibility of every step to everybody in the chain”, says Dries. ‘Trust’ is incredibly important in a society that lacks trust, following several scandals regarding food and even vaccinations.”

Robert van Aert: “A logistics and traceability application can help a consumer verify that the bag he buys in a Shanghai shop is a real Louis Vuitton. You can eat sushi in a restaurant and know the source of every single piece of fish or rice that the chef used, including the way it was transported and at what temperatures.”

Before starting CBP, Robert and Dries first founded China Crypto News in July 2017, a news platform about Chinese crypto and blockchain projects. “We interviewed several Chinese blockchain platforms. We learned a lot in short time and, more importantly, we found some extremely promising projects that asked us to support them with international exposure, investment and partnerships to fulfil its true potential.”

For Chinese blockchain businesses, CBP becomes part of the European operations of these projects, rolls out a PR and media strategy as well as develops their government relations and actively seeks B2B partners and investors. They initiated and facilitated, for example, a meeting between Vechain’s CEO Sunny Lu and Belgium’s deputy prime-minister Alexander de Croo. “We help EU blockchain projects roll out their services in China. By doing this they gain market share, attract a new customer base in China and innovate their way of doing business. What is interesting about China? The development and adoption of new technologies goes much faster than in the West.”

Blockchain projects and their international business partners require support. The firm’s legal experts guide ventures with legal set up, structure, disclaimers for blockchain businesses. Robert: “We help projects to raise capital and establish investor partnerships all over the world. We partnered up with NEO, a leading Chinese project, to help them with their global expansion. We tackled legal questions related to their rollout in EU ranging from the status of smart contracts, tokens and digital proof to optimal legal set up, securities-related laws and tax/auditing requirements.”

Blockchain opens up a world of business opportunities, the founders of China Blockchain Partners found out. Dries: “There is so much happening in blockchain right now. From real estate to supply chain and even health care: it starts with an idea, then someone develops a use case that quickly develops into a business case, and on to a project and a business. We are right in the middle of this.” Robert, who is also advisor to Dutch-based blockchain project Cecil Alliance, proud: “The network we built over the last couple of years is really being utilized now and leads to actual results. It is basically about bringing together four different worlds: connecting China and the West and blockchain with traditional businesses aiming to integrate new technologies.”

Hangzhou opened the new Blockchain Industrial Park is the first dedicated blockchain business center in the world, with ten tenants.

The latest innovation on – shown on the CES Consumer Electronics Show in Las Vegas – was a drone (Ehang 184) from China that is capable of carrying people.