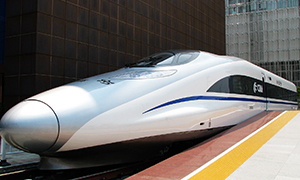 A decade ago, China had to import German, French and Japanese trains to bring its domestic high-speed train dream to reality. Now, Chinese rail companies have mastered the technology to build the trains and are now actively seeking markets overseas to sell their trains, thus competing with the established players in this segment.

Deutsche Welle reports that China has invested about $500 billion into building its domestic high-speed rail infrastructure. The country currently has more than 11,000 kilometres of dedicated high-speed train tracks, and the trains to transport millions of people. In the story, Thomas König, China expert at the European Council on Foreign Relations, says that China has "identified the potential of the market early on and is now making the most of it."

Image by Alancrh, via Wikimedia Commons

Within 15 years China will be the world’s largest market for autonomous vehicles, the Boston Consulting Group China concludes based on research.