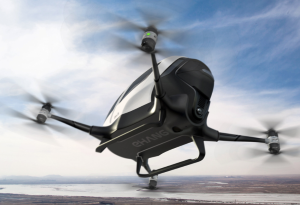 Most modern drones carry a camera, offering great possibilities for video coverage of events and great views. The latest innovation – shown on the CES Consumer Electronics Show in Las Vegas – was a drone from China that is capable of carrying people. The Ehang 184 is the world's first passenger-ready drone.

Ehang says its goal is to commercialize the PFV (personal flying vehicle) in China within three to four months. Technically, you can travel from A to B in the Ehang 184. This drone can carry a payload of one human being.

It has eight rotors pushing 142 horsepower. The rotors are capable of lifting its cargo up to as high as 3,300 metres while cruising at just under 100 kilometres per hour. Just step into the drone, turn it on, tap your destination on the 12-inch tablet display and take off.

There are some disadvantages, other than the fact that FAA-type authorities all over the world will want to see proof the drone is safe to operate. The drone has only 23 minutes of flight time before needing a charge, passengers may not get as far as they'd expect traveling through the air. With that in mind, the Ehang may not be worth €183,000 to €275,000 to most people.

Beijing is pouring trillions of Yuan into rail transport

Beijing is planning to spend 3.8 trillion Yuan (€560 billion) on railroad infrastructure, rail lines and trains in the 2016-2020 period.

Rising crude purchases and a lack of offloading capacity and of space in storage tanks in Chinese ports is causing oil tanker traffic jams off the coast.