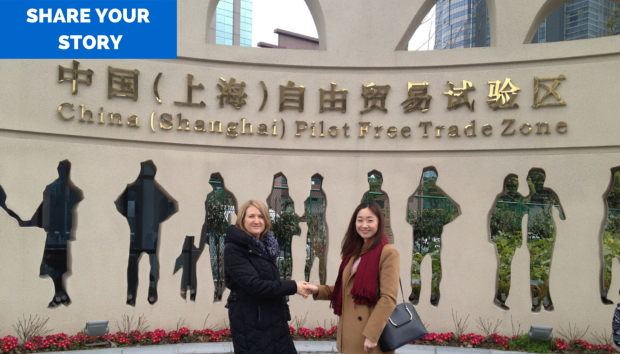 ConnectChina – member of Club China – is a small business support consultancy firm that has just set up shop in Shanghai’s Free Trade Zone (FTZ). Having just gone through the whole administrative process of settling her business in the FTZ, Club China asked managing director Joanna Lavan to share her experiences and insights. “Starting a JV or WFOE in the FTZ is a fast and cheap way to establish local presence in China.”

Joanna Lavan had been working with China since 2000 when she headed up an EU funded project for Leeds Beckett University, known as ‘ChinaVentures’. The goal was to take UK companies to China to establish formal business relationships with Chinese companies in Zhejiang Province. The project was a success and in 2004 she and her Chinese colleague Qiongya Pan (English name: Pam) took up the idea to put expertise to work for her in a new Yorkshire-based company ConnectChina, consultancy and business support company focused on China.

Joanna: “Having a formal presence ourselves in China was an important part of our growth strategy. Over the years, we had looked at different options but as a small business, the legal costs of setting up were in the region of almost € 13.000 plus the registration capital required (minimum US$100,000) was just beyond our resources. Setting up a representative office would have been cheaper but would not allow us to invoice in RMB to attract new Chinese clients.”

Joanna and Pam had just started to look at a FIPE (Foreign Invested Partnership Enterprise), a new model that required no registration capital, when the Shanghai Pilot FTZ (Free Trade Zone) option arose. “We visited Shanghai FTZ to see if we could establish a FIPE and were told a JV or WFOE was better. We discovered that the whole process of setting up such a company was a one-stop shop model with an online application – and much faster and cheaper.” The decision was made to establish a JV – Joanna and Pam – in Shanghai FTZ. Joanna explains that selecting one of the many agents to help the JV get registered took some time and “strong negotiation from our side to lower the costs”. “All in all the FTZ JV is still a cheap option – with no registration capital to pay immediately.”

The next step was to offer 20-30 possible names in Chinese for the company. “Our first batch was rejected by the authorities because the names were already taken. After another five names and a further five days, we ended up with奈特华, in Pinyin (phonetic system for transcribing the Mandarin pronunciations of Chinese characters into the Latin alphabet, ed.) it is: ‘Nai Te Hua’. ‘Nai Te’ sounds like Net, ‘Hua’ means China. This took longer than anticipated but at least we had our Chinese name approved!”

“Then came the online application which was finally approved after having to revise our business scope four times! The reason for this was that we wanted to include training and immigration in our business scope. This was not allowed as you have to have special permission. We then had to prepare several documents including ‘Articles of Association’ in Chinese for the application, ‘Resolution of the Shareholders Meeting’ et cetera. The agent provided the templates required for all the documents – so it was much easier than it sounds. And it wouldn’t be China without the bureaucracy!”

All the paperwork completed – and after only one month, the JV was finally approved. “Although our registration address is in Shanghai FTZ, we decided to locate our Shanghai office in the business district in Puxi which is a more central. We now have a team of bilingual staff, led by Pam, experienced in both international trade and business.”

Joanna and Pam are keen to let other smaller companies know about the benefits of using Shanghai FTZ to set up a company and grow their business faster. As getting registered in Shanghai FTZ is now one of the company’s areas of expertise, the entrepreneurs decided to add a ‘QuickStartChina’ package to their business support services. “We also offer an ‘OfficeShare’ where we can also help companies to develop their business quickly. Our first ‘QuickStartChina’ client has in fact just moved out of our office after six months into their own office (next door) because they have grown so quickly using our support and expertise!”

The benefits of the Shanghai Free Trade Zone | Helpdesk

Amazon.com in Shanghai FTZ for direct delivery to China