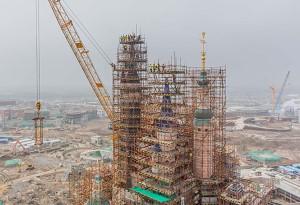 The new Disney store in the Pudong New Area has proven to be a huge success. On opening day, there was a queue of more than one kilometre long, with waiting times of up to 3 hours.

To help getting rid of the queue, customers were allowed into the store till 10pm.
The new Disney store is by far the largest Disney store in the world. The 5,860 square metre store features more than 2,000 kinds of souvenirs, including clothing, smartphone covers, stationery and bags.

Product prices are considered to be relatively high. They range from about 20 yuan (€2.90) to more than 1,000 yuan (€145), which is costlier than prices in Disney stores in the Hong Kong and Tokyo parks.

In 2016, Disney’s new theme park will open its doors in Shanghai. Shanghai Disneyland will be a Magic Kingdom-style Disney theme park with brand new attractions and experiences specifically designed for the China market. The park will include six themed lands, which feature unique attractions, rides and immersive experience. Located at the heart of the theme park, the iconic Enchanted Storybook Castle will be the tallest and largest Disney castle yet, complete with entertainment, dining and performance spaces.

Beijing is finally going to get an international theme park. Plans for Universal Studios Beijing have finally been unveiled to the public.