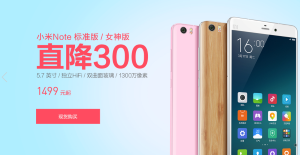 Apple is the last international brand left in China’s smartphone sales top 5. In 2015, Samsung was ousted from the mobile phone ranking in China, with domestic brands performing well. Overall sales of smartphones grew 8 percent in Q4, to a total of 117.3 devices sold.

Shanghai Daily reports that Huawei was leading the pack in Q4 of 2015, with a market share of 17.9 percent. According to market data provided by research firm IDC, Apple came second (17.1 percent), with Xiaomi finishing third (16.9).

In China, having a good credit score is now something to brag about. Almost 100,000 people have posted their Sesame Credit (Alibaba) credit score online.

Tianhe-2 is the world’s most powerful supercomputer

China has the most powerful computer in the world. The Tianhe-2 computer tops the Top500 list of the world’s top supercomputers, compiled by researchers.