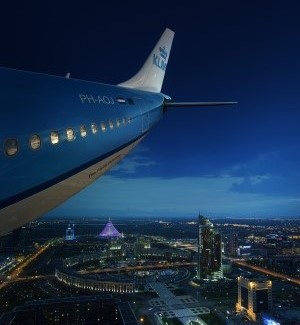 KLM Royal Dutch Airlines launches its eighth new destination for summer 2016. The airline will expand its long-haul services to Kazakhstan by combining the current Almaty flights with service to the capital Astana. Service on the Amsterdam-Almaty-Astana route will start on 3 May 2016.

The flights will be operated by an Airbus A330-200. KLM will cater to customer requirements by offering three different passenger classes aboard the aircraft: 30 seats in World Business Class, 35 seats in Economy Comfort, and 178 seats in Economy Class. Economy Comfort Class offers 10 cm more legroom, double-reclining seats and priority de-boarding.

“We are very glad to announce this new KLM route to Astana in combination with our other destination in Kazakhstan; Almaty. KLM’s strategy to add many new routes for its customers is reaffirmed with this eighth new destination, in addition to Salt Lake City, Genoa, Ibiza, Dresden, Southampton, Inverness and Valencia, Pieter Elbers - KLM President & CEO”

Founded in 1830, Astana (which means ‘capital’ in Kazakh) has been the capital of Kazakhstan since 1997, taking over from Almaty. It has a population of around 835.000. Astana is home to the Parliament House, the Ak Orda Presidential Palace, the Supreme Court, and numerous government departments and agencies. Astana also has numerous modern buildings, including the Khan Shatyr shopping centre and the landmark building Bayterek Tower. Astana will be hosting the Expo 2017.

« Previous item Next item »
Book your KLM flight to Astana