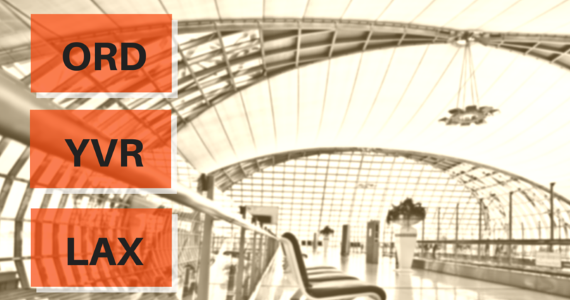 Did you ever wonder how some airports got cryptic three-letter codes, like ORD (Chicago) and YVR (Vancouver)? How Amsterdam got its AMS code seems clear and also HKG for Hong Kong is easy to figure out. Time to reveal the ‘secrets’ of airport codes.

The airport codes for Sydney, Melbourne and Perth – SYD, MEL and PER – make perfect sense, as Australian Business Traveller points out. The code for Brisbane – BNE – is less easy. The more obvious choice for the code BRI was already ‘taken’ by the airport at the Italian city of Bari. And Bari missed out on the simple BAR code, that one was already reserved for Baker Army Airfield on a tiny uninhabited atoll in the Pacific Ocean.

But how did Los Angeles airport code get its X, like in LAX? In the early days of air travel when airports were referred to by a two-letter 'weather station' code, like LA. When the growth of air travel created the need for three-letter codes, the airport’s original designation had an ‘X’ amended to ease the transition, the same happened with Portland (PDX). With the X meaning actually nothing… Dubai, code DXB? This one was chosen with the ‘X’ having no meaning other than to fill out the three characters. By the way, DUB was already claimed for Dublin.

What about Chicago's ORD? The original O'Hare Field strip at this location was adjacent to a small farming community named Orchard Place. The airport soon took the name Orchard Field Airport, which became ORD.

Canada is a different story. All airport codes in this country begin with the letter Y. This comes from the old radio days. At that time, North American market was divided into three geographic zones, each carrying a regional-specific letter to be used in front of a station's call sign. All radio stations in Canada were to begin with Y. Now you understand why Vancouver has the YVR code and Ottawa the YOW.

KLM has expanded its offer in South America. Now, you can fly to Santiago de Chile 3 times a week.