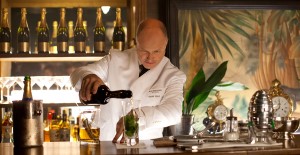 The Ritz Paris originally opened in June 1898, and closed for refurbishment in August 2012. The works in the hotel over the past four years included building a tunnel under the Place Vendome to allow guests to discreetly enter the hotel from the parking garage. As part of the refurbishment of the rooms, original furniture and masterpieces have been restored. Rooms at the hotel that is a member of the Leading Hotels of the World start from €1,000 per night.

The hotel was founded by the Swiss hotelier, César Ritz, in collaboration with the chef Auguste Escoffier. The new hotel was constructed behind the façade of an 18th-century town house, overlooking one of Paris's most beautiful squares. It was reportedly the first hotel in Europe to provide a bathroom en suite, a telephone and electricity for each room.

Image by the Ritz Paris

Sydney is world's most liveable city

Sydney, Australia is the world’s most liveable city, according to a PwC report.

Ritz-Carlton is the number one chain in business travel hotels.

The Penthouse Suite at The Fairmont San Francisco

The Fairmont in San Francisco is placed in the top ten of most expensive hotel rooms.